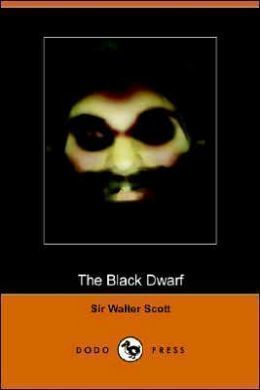 The Black Dwarf, is set in the Liddesdale hills, an area which Scott knew intimately from the time he had spent hunting ballads for his Minstrelsy of the Scottish Border. The plot itself draws on a number of Border Ballads. The adventures of Hobbie Elliot, the pillage of Heughfott, appeal to the Black Dwarf for help, gathering of forces, and the ‘siege’ of Westburnflat parallel events in the ballads ‘Jamie Telfer of the Fair Dodhead’ and ‘The Fray of Support’.

It was a fine April morning (excepting that it had snowed hard the night before, and the ground remained covered with a dazzling mantle of six inches in depth) when two horsemen rode up to the Wallace Inn. The first was a strong, tall, powerful man, in a grey riding-coat, having a hat covered with waxcloth, a huge silver-mounted horsewhip, boots, and dreadnought overalls. He was mounted on a large strong brown mare, rough in coat, but well in condition, with a saddle of the yeomanry cut, and a double-bitted military bridle. The man who accompanied him was apparently his servant; he rode a shaggy little grey pony, had a blue bonnet on his head, and a large check napkin folded about his neck, wore a pair of long blue worsted hose instead of boots, had his gloveless hands much stained with tar, and observed an air of deference and respect towards his companion, but without any of those indications of precedence and punctilio which are preserved between the gentry and their domestics. On the contrary, the two travellers entered the court-yard abreast, and the concluding sentence of the conversation which had been carrying on betwixt them was a joint ejaculation, “Lord guide us, an this weather last, what will come o’ the lambs!” The hint was sufficient for my Landlord, who, advancing to take the horse of the principal person, and holding him by the reins as he dismounted, while his ostler rendered the same service to the attendant, welcomed the stranger to Gandercleugh, and, in the same breath, enquired, “What news from the south hielands?”

“News?” said the farmer, “bad eneugh news, I think;–an we can carry through the yowes, it will be a’ we can do; we maun e’en leave the lambs to the Black Dwarfs care.”

“Ay, ay,” subjoined the old shepherd (for such he was), shaking his head, “he’ll be unco busy amang the morts this season.”

“The Black Dwarf!” said MY LEARNED FRIEND AND PATRON, Mr. Jedediah Cleishbotham, “and what sort of a personage may he be?”

[We have, in this and other instances, printed in italics (CAPITALS in this etext) some few words which the worthy editor, Mr. Jedediah Cleishbotham, seems to have interpolated upon the text of his deceased friend, Mr. Pattieson. We must observe, once for all, that such liberties seem only to have been taken by the learned gentleman where his own character and conduct are concerned; and surely he must be the best judge of the style in which his own character and conduct should be treated of.]

“Hout awa, man,” answered the farmer, “ye’ll hae heard o’ Canny Elshie the Black Dwarf, or I am muckle mistaen–A’ the warld tells tales about him, but it’s but daft nonsense after a’–I dinna believe a word o’t frae beginning to end.”

“Your father believed it unco stievely, though,” said the old man, to whom the scepticism of his master gave obvious displeasure.

“Ay, very true, Bauldie, but that was in the time o’ the blackfaces–they believed a hantle queer things in thae days, that naebody heeds since the lang sheep cam in.”

“The mair’s the pity, the mair’s the pity,” said the old man. “Your father, and sae I have aften tell’d ye, maister, wad hae been sair vexed to hae seen the auld peel-house wa’s pu’d down to make park dykes; and the bonny broomy knowe, where he liked sae weel to sit at e’en, wi’ his plaid about him, and look at the kye as they cam down the loaning, ill wad he hae liked to hae seen that braw sunny knowe a’ riven out wi’ the pleugh in the fashion it is at this day.”

“Hout, Bauldie,” replied the principal, “tak ye that dram the landlord’s offering ye, and never fash your head about the changes o’ the warld, sae lang as ye’re blithe and bien yoursell.”

“Wussing your health, sirs,” said the shepherd; and having taken off his glass, and observed the whisky was the right thing, he continued, “It’s no for the like o’ us to be judging, to be sure; but it was a bonny knowe that broomy knowe, and an unco braw shelter for the lambs in a severe morning like this.”

“Ay,” said his patron, “but ye ken we maun hae turnips for the lang sheep, billie, and muckle hard wark to get them, baith wi’ the pleugh and the howe; and that wad sort ill wi’ sitting on the broomy knowe, and cracking about Black Dwarfs, and siccan clavers, as was the gate lang syne, when the short sheep were in the fashion.”

Here my WORTHY AND LEARNED patron again interposed, and observed, “that he could never perceive any material difference, in point of longitude, between one sheep and another.”