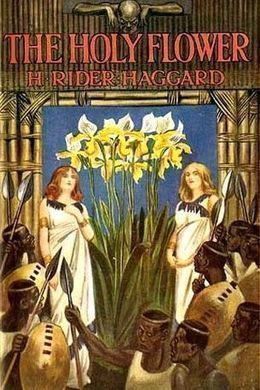 Allan and the Holy Flower

Allan and the Holy Flower is a 1915 novel by H. Rider Haggard featuring Allan Quatermain. It first appeared serialised in The Windsor Magazine. Brother John, who has been wandering in Africa for years, confides to Allan a huge and rare orchid, the largest ever found. Allan arrives to England with the flower and there he meets Mr. Somers, an orchid collector who is willing to finance an expedition to find the plant.

I do not suppose that anyone who knows the name of Allan Quatermain would be likely to associate it with flowers, and especially with orchids. Yet as it happens it was once my lot to take part in an orchid hunt of so remarkable a character that I think its details should not be lost. At least I will set them down, and if in the after days anyone cares to publish them, well–he is at liberty to do so.

It was in the year–oh! never mind the year, it was a long while ago when I was much younger, that I went on a hunting expedition to the north of the Limpopo River which borders the Transvaal. My companion was a gentleman of the name of Scroope, Charles Scroope. He had come out to Durban from England in search of sport. At least, that was one of his reasons. The other was a lady whom I will call Miss Margaret Manners, though that was not her name.

It seems that these two were engaged to be married, and really attached to each other. Unfortunately, however, they quarrelled violently about another gentlemen with whom Miss Manners danced four consecutive dances, including two that were promised to her fiancé at a Hunt ball in Essex, where they all lived. Explanations, or rather argument, followed. Mr. Scroope said that he would not tolerate such conduct. Miss Manners replied that she would not be dictated to; she was her own mistress and meant to remain so. Mr. Scroope exclaimed that she might so far as he was concerned. She answered that she never wished to see his face again. He declared with emphasis that she never should and that he was going to Africa to shoot elephants.

What is more, he went, starting from his Essex home the next day without leaving any address. As it transpired afterwards, long afterwards, had he waited till the post came in he would have received a letter that might have changed his plans. But they were high-spirited young people, both of them, and played the fool after the fashion of those in love.

Well, Charles Scroope turned up in Durban, which was but a poor place then, and there we met in the bar of the Royal Hotel.

“If you want to kill big game,” I heard some one say, who it was I really forget, “there’s the man to show you how to do it–Hunter Quatermain; the best shot in Africa and one of the finest fellows, too.”

I sat still, smoking my pipe and pretending to hear nothing. It is awkward to listen to oneself being praised, and I was always a shy man.

Then after a whispered colloquy Mr. Scroope was brought forward and introduced to me. I bowed as nicely as I could and ran my eye over him. He was a tall young man with dark eyes and a rather romantic aspect (that was due to his love affair), but I came to the conclusion that I liked the cut of his jib. When he spoke, that conclusion was affirmed. I always think there is a great deal in a voice; personally, I judge by it almost as much as by the face. This voice was particularly pleasant and sympathetic, though there was nothing very original or striking in the words by which it was, so to speak, introduced to me. These were:

I answered that I never drank spirits in the daytime, or at least not often, but that I should be pleased to take a small bottle of beer.

When the beer was consumed we walked up together to my little house on which is now called the Berea, the same in which, amongst others, I received my friends, Curtis and Good, in after days, and there we dined. Indeed, Charlie Scroope never left that house until we started on our shooting expedition.

Now I must cut all this story short, since it is only incidentally that it has to do with the tale I am going to tell. Mr. Scroope was a rich man and as he offered to pay all the expenses of the expedition while I was to take all the profit in the shape of ivory or anything else that might accrue, of course I did not decline his proposal.

Everything went well with us on that trip until its unfortunate end. We only killed two elephants, but of other game we found plenty. It was when we were near Delagoa Bay on our return that the accident happened.

We were out one evening trying to shoot something for our dinner, when between the trees I caught sight of a small buck. It vanished round a little promontory of rock which projected from the side of the kloof, walking quietly, not running in alarm. We followed after it. I was the first, and had just wriggled round these rocks and perceived the buck standing about ten paces away (it was a bush-bok), when I heard a rustle among the bushes on the top of the rock not a dozen feet above my head, and Charlie Scroope’s voice calling:

“Who’s coming?” I answered in an irritated tone, for the noise had made the buck run away.