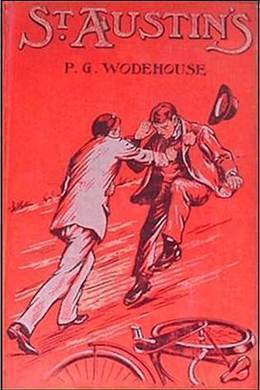 St Austin’s School is the setting for these twelve delightful early Wodehouse stories. A nostalgic look at English public-school life at the turn of the twentieth century, the cricket-filled tales are made enjoyable today by the young Wodehouse’s gentle humor and witty turn of phrase.

Pillingshot was annoyed. He was disgusted, mortified; no other word for it. He had no objection, of course, to Mr Mellish saying that his work during the term, and especially his Livy, had been disgraceful. A master has the right to say that sort of thing if he likes. It is one of the perquisites of the position. But when he went on to observe, without a touch of shame, that there would be an examination in the Livy as far as they had gone in it on the following Saturday, Pillingshot felt that he exceeded. It was not playing the game. There were the examinations at the end of term. Those were fair enough. You knew exactly when they were coming, and could make your arrangements accordingly. But to spring an examination on you in the middle of the term out of a blue sky, as it were, was underhand and unsportsmanlike, and would not do at all. Pillingshot wished that he could put his foot down. He would have liked to have stalked up to Mr Mellish’s desk, fixed him with a blazing eye, and remarked, ‘Sir, withdraw that remark. Cancel that statement instantly, or–!’ or words to that effect.

After which the lesson had proceeded on its course.

‘Yes, it is rather low, isn’t it?’ said Pillingshot’s friend, Parker, as Pillingshot came to the end of a stirring excursus on the rights of the citizen, with special reference to mid-term Livy examinations. ‘That’s the worst of Mellish. He always has you somehow.’

‘But what am I to do?’ raved Pillingshot.

‘I should advise you to swot it up before Saturday,’ said Parker.

What was the good of friends if they could only make idiotic suggestions like that?

He retired, brooding, to his house.

The day was Wednesday. There were only two more days, therefore, in which to prepare a quarter of a book of Livy. It couldn’t be done. The thing was not possible.

In the house he met Smythe.

‘What are you going to do about it?’ he inquired. Smythe was top of the form, and if he didn’t know how to grapple with a crisis of this sort, who could know?

‘If you’ll kindly explain,’ said Smythe, ‘what the dickens you are talking about, I might be able to tell you.’

Pillingshot explained, with unwonted politeness, that ‘it’ meant the Livy examination.

‘Oh,’ said Smythe, airily, ‘that! I’m just going to skim through it in case I’ve forgotten any of it. Then I shall read up the notes carefully. And then, if I have time, I shall have a look at the history of the period. I should advise you to do that, too.’

And he retired, brooding, as before.

That afternoon he spent industriously, copying out the fourth book of The Aeneid. At the beginning of the week he had had a slight disagreement with M. Gerard, the French master.

Pillingshot’s views on behaviour and deportment during French lessons did not coincide with those of M. Gerard. Pillingshot’s idea of a French lesson was something between a pantomime rally and a scrum at football. To him there was something wonderfully entertaining in the process of ‘barging’ the end man off the edge of the form into space, and upsetting his books over him. M. Gerard, however, had a very undeveloped sense of humour. He warned the humorist twice, and on the thing happening a third time, suggested that he should go into extra lesson on the ensuing Wednesday.

So Pillingshot went, and copied out Virgil.

He emerged from the room of detention at a quarter past four. As he came out into the grounds he espied in the middle distance somebody being carried on a stretcher in the direction of the School House. At the same moment Parker loomed in sight, walking swiftly towards the School shop, his mobile features shining with the rapt expression of one who sees much ginger-beer in the near future.

‘What, haven’t you heard?’ said Parker. ‘Oh, no, of course, you were in extra. It’s young Brown. He’s stunned or something.’

‘How did it happen?’

‘That rotter, Babington, in Dacre’s. Simply slamming about, you know, getting his eye in before going in, and Brown walked slap into one of his drives. Got him on the side of the head.’

‘Come and have an ice,’ said Parker.