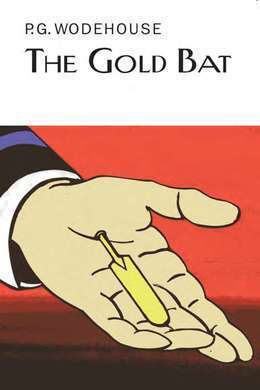 When O’Hara and Moriarty, two boys at Wrykyn School, tar and feather the statue of a pompous local MP, O’Hara mislays at the scene of their crime a tiny gold bat borrowed from Trevor, captain of the school cricket team. The plot revolves around the fate of this bat and attempts to retrieve it, but the real focus of the novel is a vivid portrayal of school life. Though the setting is an English public school in the years before World War 1, so sharp is Wodehouse’s ear for the way children talk that everyone will recognise familiar characters and situations, whatever their place of education.

“My dear chap, I’ve been waiting here a month.”

“When you fellows have quite finished rotting about in front of that bath don’t let me detain you.”

“Anybody seen that sponge?”

“Well, look here”–this in a tone of compromise–“let’s toss for it.”

All of which, being interpreted, meant that the first match of the Easter term had just come to an end, and that those of the team who, being day boys, changed over at the pavilion, instead of performing the operation at leisure and in comfort, as did the members of houses, were discussing the vital question–who was to have first bath?

The Field Sports Committee at Wrykyn–that is, at the school which stood some half-mile outside that town and took its name from it–were not lavish in their expenditure as regarded the changing accommodation in the pavilion. Letters appeared in every second number of the Wrykinian, some short, others long, some from members of the school, others from Old Boys, all protesting against the condition of the first, second, and third fifteen dressing-rooms. “Indignant” would inquire acidly, in half a page of small type, if the editor happened to be aware that there was no hair-brush in the second room, and only half a comb. “Disgusted O. W.” would remark that when he came down with the Wandering Zephyrs to play against the third fifteen, the water supply had suddenly and mysteriously failed, and the W.Z.’s had been obliged to go home as they were, in a state of primeval grime, and he thought that this was “a very bad thing in a school of over six hundred boys”, though what the number of boys had to do with the fact that there was no water he omitted to explain. The editor would express his regret in brackets, and things would go on as before.

There was only one bath in the first fifteen room, and there were on the present occasion six claimants to it. And each claimant was of the fixed opinion that, whatever happened subsequently, he was going to have it first. Finally, on the suggestion of Otway, who had reduced tossing to a fine art, a mystic game of Tommy Dodd was played. Otway having triumphantly obtained first innings, the conversation reverted to the subject of the match.

The Easter term always opened with a scratch game against a mixed team of masters and old boys, and the school usually won without any great exertion. On this occasion the match had been rather more even than the average, and the team had only just pulled the thing off by a couple of tries to a goal. Otway expressed an opinion that the school had played badly.

“Why on earth don’t you forwards let the ball out occasionally?” he asked. Otway was one of the first fifteen halves.

“They were so jolly heavy in the scrum,” said Maurice, one of the forwards. “And when we did let it out, the outsides nearly always mucked it.”

“Well, it wasn’t the halves’ fault. We always got it out to the centres.”

“It wasn’t the centres,” put in Robinson. “They played awfully well. Trevor was ripping.”

“Trevor always is,” said Otway; “I should think he’s about the best captain we’ve had here for a long time. He’s certainly one of the best centres.”

Rivers-Jones was one of those players who mark an epoch. He had been in the team fifteen years ago, and had left Wrykyn to captain Cambridge and play three years in succession for Wales. The school regarded the standard set by him as one that did not admit of comparison. However good a Wrykyn centre three-quarter might be, the most he could hope to be considered was “the best since Rivers-Jones”. “Since” Rivers-Jones, however, covered fifteen years, and to be looked on as the best centre the school could boast of during that time, meant something. For Wrykyn knew how to play football.

Since it had been decided thus that the faults in the school attack did not lie with the halves, forwards, or centres, it was more or less evident that they must be attributable to the wings. And the search for the weak spot was even further narrowed down by the general verdict that Clowes, on the left wing, had played well. With a beautiful unanimity the six occupants of the first fifteen room came to the conclusion that the man who had let the team down that day had been the man on the right–Rand-Brown, to wit, of Seymour’s.

“I’ll bet he doesn’t stay in the first long,” said Clephane, who was now in the bath, vice Otway, retired. “I suppose they had to try him, as he was the senior wing three-quarter of the second, but he’s no earthly good.”

“He only got into the second because he’s big,” was Robinson’s opinion. “A man who’s big and strong can always get his second colours.”