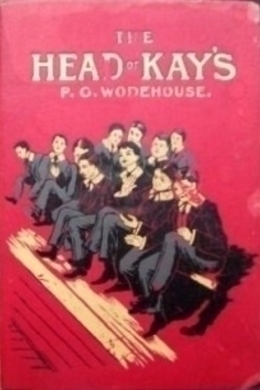 The Head of Kay's

It is the general view at Eckleton school that there never was such a house of slackers as Kay’s. Fenn, head of house and county cricketer, does his best to impose some discipline but is continually undermined by his house-master, the meddlesome and ineffectual Mr Kay. After the Summer Concert fiasco, Mr Kay resolves to remove Fenn from office and puts his house into special measures, co-opting Kennedy, second prefect of Blackburn’s, as reluctant troubleshooter with a brief to turn the place around. But without the backing of Fenn, and the whole house hostile towards him, how can he achieve the impossible…?

“When we get licked tomorrow by half-a-dozen wickets,” said Jimmy Silver, tilting his chair until the back touched the wall, “don’t say I didn’t warn you. If you fellows take down what I say from time to time in note-books, as you ought to do, you’ll remember that I offered to give anyone odds that Kay’s would out us in the final. I always said that a really hot man like Fenn was more good to a side than half-a-dozen ordinary men. He can do all the bowling and all the batting. All the fielding, too, in the slips.”

Tea was just over at Blackburn’s, and the bulk of the house had gone across to preparation in the school buildings. The prefects, as was their custom, lingered on to finish the meal at their leisure. These after-tea conversations were quite an institution at Blackburn’s. The labours of the day were over, and the time for preparation for the morrow had not yet come. It would be time to be thinking of that in another hour. Meanwhile, a little relaxation might be enjoyed. Especially so as this was the last day but two of the summer term, and all necessity for working after tea had ceased with the arrival of the last lap of the examinations.

Silver was head of the house, and captain of its cricket team, which was nearing the end of its last match, the final for the inter-house cup, and–on paper–getting decidedly the worst of it. After riding in triumph over the School House, Bedell’s, and Mulholland’s, Blackburn’s had met its next door neighbour, Kay’s, in the final, and, to the surprise of the great majority of the school, was showing up badly. The match was affording one more example of how a team of average merit all through may sometimes fall before a one-man side. Blackburn’s had the three last men on the list of the first eleven, Silver, Kennedy, and Challis, and at least nine of its representatives had the reputation of being able to knock up a useful twenty or thirty at any time. Kay’s, on the other hand, had one man, Fenn. After him the tail started. But Fenn was such an exceptional all-round man that, as Silver had said, he was as good as half-a-dozen of the Blackburn’s team, equally formidable whether batting or bowling–he headed the school averages at both. He was one of those batsmen who seem to know exactly what sort of ball you are going to bowl before it leaves your hand, and he could hit like another Jessop. As for his bowling, he bowled left hand–always a puzzling eccentricity to an undeveloped batsman–and could send them down very fast or very slow, as he thought best, and it was hard to see which particular brand he was going to serve up before it was actually in mid-air.

But it is not necessary to enlarge on his abilities. The figures against his name in Wisden prove a good deal. The fact that he had steered Kay’s through into the last round of the house-matches proves still more. It was perfectly obvious to everyone that, if only you could get Fenn out for under ten, Kay’s total for that innings would be nearer twenty than forty. They were an appalling side. But then no house bowler had as yet succeeded in getting Fenn out for under ten. In the six innings he had played in the competition up to date, he had made four centuries, an eighty, and a seventy.

Kennedy, the second prefect at Blackburn’s, paused in the act of grappling with the remnant of a pot of jam belonging to some person unknown, to reply to Silver’s remarks.

“We aren’t beaten yet,” he said, in his solid way. Kennedy’s chief characteristics were solidity, and an infinite capacity for taking pains. Nothing seemed to tire or discourage him. He kept pegging away till he arrived. The ordinary person, for instance, would have considered the jam-pot, on which he was then engaged, an empty jam-pot. Kennedy saw that there was still a strawberry (or it may have been a section of a strawberry) at the extreme end, and he meant to have that coy vegetable if he had to squeeze the pot to get at it. To take another instance, all the afternoon of the previous day he had bowled patiently at Fenn while the latter lifted every other ball into space. He had been taken off three times, and at every fresh attack he had plodded on doggedly, until at last, as he had expected, the batsman had misjudged a straight one, and he had bowled him all over his wicket. Kennedy generally managed to get there sooner or later.