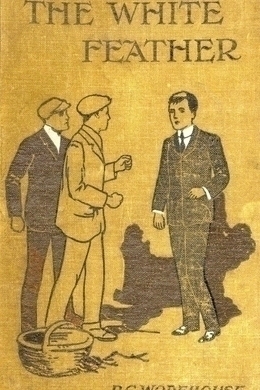 In order to save his reputation and the honour of his house at school after he shames himself by running away from a fight between fellow pupils and toughs from the local town, a studious schoolboy takes up the study of boxing. This charming early novel by P. G. Wodehouse plays a series of witty variations on the standard school story of the period, balancing the minor heroics of the action against a humorously ironic commentary. The simple tale is given sparkle by vivid character drawing and the author’s sharp ear for schoolboy dialogue.

“With apologies to gent opposite,” said Clowes, “I must say I don’t think much of the team.”

“Don’t apologise to me,” said Allardyce disgustedly, as he filled the teapot, “I think they’re rotten.”

“They ought to have got into form by now, too,” said Trevor. “It’s not as if this was the first game of the term.”

“First game!” Allardyce laughed shortly. “Why, we’ve only got a couple of club matches and the return match with Ripton to end the season. It is about time they got into form, as you say.”

Clowes stared pensively into the fire.

“They struck me,” he said, “as the sort of team who’d get into form somewhere in the middle of the cricket season.”

“That’s about it,” said Allardyce. “Try those biscuits, Trevor. They’re about the only good thing left in the place.”

“School isn’t what it was?” inquired Trevor, plunging a hand into the tin that stood on the floor beside him.

“No,” said Allardyce, “not only in footer but in everything. The place seems absolutely rotten. It’s bad enough losing all our matches, or nearly all. Did you hear that Ripton took thirty-seven points off us last term? And we only just managed to beat Greenburgh by a try to nil.”

“We got thirty points last year,” he went on. “Thirty-three, and forty-two the year before. Why, we’ve always simply walked them. It’s an understood thing that we smash them. And this year they held us all the time, and it was only a fluke that we scored at all. Their back miskicked, and let Barry in.”

“Barry struck me as the best of the outsides today,” said Clowes. “He’s heavier than he was, and faster.”

“He’s all right,” agreed Allardyce. “If only the centres would feed him, we might do something occasionally. But did you ever see such a pair of rotters?”

“The man who was marking me certainly didn’t seem particularly brilliant. I don’t even know his name. He didn’t do anything at footer in my time,” said Trevor.

“He’s a chap called Attell. He wasn’t here with you. He came after the summer holidays. I believe he was sacked from somewhere. He’s no good, but there’s nobody else. Colours have been simply a gift this year to anyone who can do a thing. Only Barry and myself left from last year’s team. I never saw such a clearance as there was after the summer term.”

“Where are the boys of the Old Brigade?” sighed Clowes.

“I don’t know. I wish they were here,” said Allardyce.

Trevor and Clowes had come down, after the Easter term had been in progress for a fortnight, to play for an Oxford A team against the school. The match had resulted in an absurdly easy victory for the visitors by over forty points. Clowes had scored five tries off his own bat, and Trevor, if he had not fed his wing so conscientiously, would probably have scored an equal number. As it was, he had got through twice, and also dropped a goal. The two were now having a late tea with Allardyce in his study. Allardyce had succeeded Trevor as Captain of Football at Wrykyn, and had found the post anything but a sinecure.

For Wrykyn had fallen for the time being on evil days. It was experiencing the reaction which so often takes place in a school in the year following a season of exceptional athletic prosperity. With Trevor as captain of football, both the Ripton matches had been won, and also three out of the four other school matches. In cricket the eleven had had an even finer record, winning all their school matches, and likewise beating the M.C.C. and Old Wrykinians. It was too early to prophesy concerning the fortunes of next term’s cricket team, but, if they were going to resemble the fifteen, Wrykyn was doomed to the worst athletic year it had experienced for a decade.

“It’s a bit of a come-down after last season, isn’t it?” resumed Allardyce, returning to his sorrows. It was a relief to him to discuss his painful case without restraint.

“We were a fine team last year,” agreed Clowes, “and especially strong on the left wing. By the way, I see you’ve moved Barry across.”

“Yes. Attell can’t pass much, but he passes better from right to left than from left to right; so, Barry being our scoring man, I shifted him across. The chap on the other wing, Stanning, isn’t bad at times. Do you remember him? He’s in Appleby’s. Then Drummond’s useful at half.”

“Jolly useful,” said Trevor. “I thought he would be. I recommended you last year to keep your eye on him.”

“About the only one there is left in the place,” observed Allardyce gloomily.

“Our genial host,” said Clowes, sawing at the cake, “appears to have that tired feeling. He seems to have lost that joie de vivre of his, what?”

“It must be pretty sickening,” said Trevor sympathetically. “I’m glad I wasn’t captain in a bad year.”