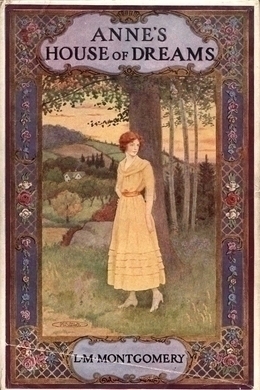 The fifth novel about Anne Shirley, the red-haired girl from Green Gables. Life seems perfect to Anne Shirley, about to marry her childhood friend Gilbert Blythe and set up home with him in her ‘house of dreams’ on the shores of Four Winds Harbor. There are new neighbours to meet and fresh problems to solve. But then tragedy strikes and there’s huge heartache for the young couple which takes all of their courage and love to overcome.

“Thanks be, I’m done with geometry, learning or teaching it,” said Anne Shirley, a trifle vindictively, as she thumped a somewhat battered volume of Euclid into a big chest of books, banged the lid in triumph, and sat down upon it, looking at Diana Wright across the Green Gables garret, with gray eyes that were like a morning sky.

The garret was a shadowy, suggestive, delightful place, as all garrets should be. Through the open window, by which Anne sat, blew the sweet, scented, sun-warm air of the August afternoon; outside, poplar boughs rustled and tossed in the wind; beyond them were the woods, where Lover’s Lane wound its enchanted path, and the old apple orchard which still bore its rosy harvests munificently. And, over all, was a great mountain range of snowy clouds in the blue southern sky. Through the other window was glimpsed a distant, white-capped, blue sea–the beautiful St. Lawrence Gulf, on which floats, like a jewel, Abegweit, whose softer, sweeter Indian name has long been forsaken for the more prosaic one of Prince Edward Island.

Diana Wright, three years older than when we last saw her, had grown somewhat matronly in the intervening time. But her eyes were as black and brilliant, her cheeks as rosy, and her dimples as enchanting, as in the long-ago days when she and Anne Shirley had vowed eternal friendship in the garden at Orchard Slope. In her arms she held a small, sleeping, black-curled creature, who for two happy years had been known to the world of Avonlea as “Small Anne Cordelia.” Avonlea folks knew why Diana had called her Anne, of course, but Avonlea folks were puzzled by the Cordelia. There had never been a Cordelia in the Wright or Barry connections. Mrs. Harmon Andrews said she supposed Diana had found the name in some trashy novel, and wondered that Fred hadn’t more sense than to allow it. But Diana and Anne smiled at each other. They knew how Small Anne Cordelia had come by her name.

“You always hated geometry,” said Diana with a retrospective smile. “I should think you’d be real glad to be through with teaching, anyhow.”

“Oh, I’ve always liked teaching, apart from geometry. These past three years in Summerside have been very pleasant ones. Mrs. Harmon Andrews told me when I came home that I wouldn’t likely find married life as much better than teaching as I expected. Evidently Mrs. Harmon is of Hamlet’s opinion that it may be better to bear the ills that we have than fly to others that we know not of.”

Anne’s laugh, as blithe and irresistible as of yore, with an added note of sweetness and maturity, rang through the garret. Marilla in the kitchen below, compounding blue plum preserve, heard it and smiled; then sighed to think how seldom that dear laugh would echo through Green Gables in the years to come. Nothing in her life had ever given Marilla so much happiness as the knowledge that Anne was going to marry Gilbert Blythe; but every joy must bring with it its little shadow of sorrow. During the three Summerside years Anne had been home often for vacations and weekends; but, after this, a bi-annual visit would be as much as could be hoped for.

“You needn’t let what Mrs. Harmon says worry you,” said Diana, with the calm assurance of the four-years matron. “Married life has its ups and downs, of course. You mustn’t expect that everything will always go smoothly. But I can assure you, Anne, that it’s a happy life, when you’re married to the right man.”

“I daresay I’ll be putting them on too, when I’ve been married four years,” she thought. “Surely my sense of humor will preserve me from it, though.”

“Is it settled yet where you are going to live?” asked Diana, cuddling Small Anne Cordelia with the inimitable gesture of motherhood which always sent through Anne’s heart, filled with sweet, unuttered dreams and hopes, a thrill that was half pure pleasure and half a strange, ethereal pain.

“Yes. That was what I wanted to tell you when I ‘phoned to you to come down today. By the way, I can’t realize that we really have telephones in Avonlea now. It sounds so preposterously up-to-date and modernish for this darling, leisurely old place.”

“We can thank the A. V. I. S. for them,” said Diana. “We should never have got the line if they hadn’t taken the matter up and carried it through. There was enough cold water thrown to discourage any society. But they stuck to it, nevertheless. You did a splendid thing for Avonlea when you founded that society, Anne. What fun we did have at our meetings! Will you ever forget the blue hall and Judson Parker’s scheme for painting medicine advertisements on his fence?”