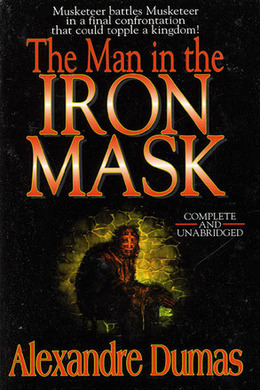 The Man in the Iron Mask

Deep inside the dreaded Bastille, a twenty-three-year-old prisoner called merely “Philippe” has languished for eight long, dark years. He does not know his real name or what crime he is supposed to have committed. But Aramis, one of the original Three Musketeers, has bribed his way into the cell to reveal the shocking secret that has kept Philippe locked away from the world. That carefully concealed truth could topple Louis XIV, king of France, which is exactly what Aramis is plotting to do!A daring jailbreak, a brilliant masquerade, and a terrifying fight for the throne may make Aramis betray his sacred vow, “All for one, and one for all!” In this concluding episode of the Three Musketeers saga, the actions of Aramis and the other Musketeers - Athos, Porthos, and the most dashing of them all, D’Artagnan - bring either honor or disgrace…and a horrifying punishment for the final loser in the battle royal.

Since Aramis’s singular transformation into a confessor of the order, Baisemeaux was no longer the same man. Up to that period, the place which Aramis had held in the worthy governor’s estimation was that of a prelate whom he respected and a friend to whom he owed a debt of gratitude; but now he felt himself an inferior, and that Aramis was his master. He himself lighted a lantern, summoned a turnkey, and said, returning to Aramis, “I am at your orders, monseigneur.” Aramis merely nodded his head, as much as to say, “Very good”; and signed to him with his hand to lead the way. Baisemeaux advanced, and Aramis followed him. It was a calm and lovely starlit night; the steps of three men resounded on the flags of the terraces, and the clinking of the keys hanging from the jailer’s girdle made itself heard up to the stories of the towers, as if to remind the prisoners that the liberty of earth was a luxury beyond their reach. It might have been said that the alteration effected in Baisemeaux extended even to the prisoners. The turnkey, the same who, on Aramis’s first arrival had shown himself so inquisitive and curious, was now not only silent, but impassible. He held his head down, and seemed afraid to keep his ears open. In this wise they reached the basement of the Bertaudiere, the two first stories of which were mounted silently and somewhat slowly; for Baisemeaux, though far from disobeying, was far from exhibiting any eagerness to obey. On arriving at the door, Baisemeaux showed a disposition to enter the prisoner’s chamber; but Aramis, stopping him on the threshold, said, “The rules do not allow the governor to hear the prisoner’s confession.”

Baisemeaux bowed, and made way for Aramis, who took the lantern and entered; and then signed to them to close the door behind him. For an instant he remained standing, listening whether Baisemeaux and the turnkey had retired; but as soon as he was assured by the sound of their descending footsteps that they had left the tower, he put the lantern on the table and gazed around. On a bed of green serge, similar in all respect to the other beds in the Bastile, save that it was newer, and under curtains half-drawn, reposed a young man, to whom we have already once before introduced Aramis. According to custom, the prisoner was without a light. At the hour of curfew, he was bound to extinguish his lamp, and we perceive how much he was favored, in being allowed to keep it burning even till then. Near the bed a large leathern armchair, with twisted legs, sustained his clothes. A little table–without pens, books, paper, or ink–stood neglected in sadness near the window; while several plates, still unemptied, showed that the prisoner had scarcely touched his evening meal. Aramis saw that the young man was stretched upon his bed, his face half concealed by his arms. The arrival of a visitor did not caused any change of position; either he was waiting in expectation, or was asleep. Aramis lighted the candle from the lantern, pushed back the armchair, and approached the bed with an evident mixture of interest and respect. The young man raised his head. “What is it?” said he.

“You desired a confessor?” replied Aramis.

“Because you were ill?”

The young man gave Aramis a piercing glance, and answered, “I thank you.” After a moment’s silence, “I have seen you before,” he continued. Aramis bowed.

Doubtless the scrutiny the prisoner had just made of the cold, crafty, and imperious character stamped upon the features of the bishop of Vannes was little reassuring to one in his situation, for he added, “I am better.”

“Why, then–being better, I have no longer the same need of a confessor, I think.”

“Not even of the hair-cloth, which the note you found in your bread informed you of?”

The young man started; but before he had either assented or denied, Aramis continued, “Not even of the ecclesiastic from whom you were to hear an important revelation?”

“If it be so,” said the young man, sinking again on his pillow, “it is different; I am listening.”

Aramis then looked at him more closely, and was struck with the easy majesty of his mien, one which can never be acquired unless Heaven has implanted it in the blood or heart. “Sit down, monsieur,” said the prisoner.

Aramis bowed and obeyed. “How does the Bastile agree with you?” asked the bishop.

“You do not suffer?”

“You have nothing to regret?”

“Not even your liberty?”