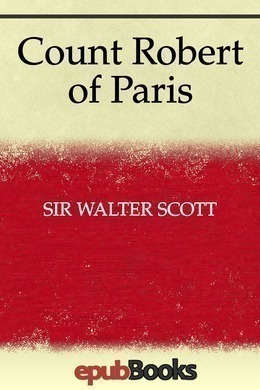 Sir Walter Scott was a master of diverse talents. He was a man of letters, a dedicated historian and historiographer, a well-read translator of foreign texts, and a talented poet. Deriving most of his material from his native Scotland, its history and its legends, Scott invented and mastered what we know today as the historical novel. Count Robert is set during the reign of the Byzantine Emperor Alexius Comnenus and focuses on the arrival of the first Crusaders. During the oath-taking ceremony on the eve of the Crusade, the haughty Count Robert insults the Emperor by seating himself on the imperial throne. Also offended is Robert’s friend Hereward, a Saxon member of the Varangian guard, exiled from England after the Norman Conquest. When the Crusaders leave Byzance for Asia, Robert is drugged and detained as captive. His Amazonian wife, Brenhilda is held separately and persecuted by the enamored Nicephorus Briennus, the emperor’s son-in-law. Brenhilda challenges Nicephorus to combat, promising to give herself to him if defeated. In the meantime, Robert is freed by Hereward, and presents himself at the duel in his wife’s stead. Nicephorus, though, does not appear as he has been arrested following the discovery of a plot to usurp Alexius. Still keen to avenge Robert’s affront to the Emperor, Hereward takes his place. Robert defeats him but spares his life in gratitude for his earlier help. Hereward follows Robert to Palestine as a vassal, after discovering that his lost Saxon love Bertha is Brenhilda’s waiting-woman. Through Robert’s influence, a portion of Hereward’s English property is restored to him.

The close observers of vegetable nature have remarked, that when a new graft is taken from an aged tree, it possesses indeed in exterior form the appearance of a youthful shoot, but has in fact attained to the same state of maturity, or even decay, which has been reached by the parent stem. Hence, it is said, arises the general decline and death that about the same season is often observed to spread itself through individual trees of some particular species, all of which, deriving their vital powers from the parent stock, are therefore incapable of protracting their existence longer than it does.

In the same manner, efforts have been made by the mighty of the earth to transplant large cities, states, and communities, by one great and sudden exertion, expecting to secure to the new capital the wealth, the dignity, the magnificent decorations and unlimited extent of the ancient city, which they desire to renovate; while, at the same time, they hope to begin a new succession of ages from the date of the new structure, to last, they imagine, as long, and with as much fame, as its predecessor, which the founder hopes his new metropolis may replace in all its youthful glories. But nature has her laws, which seem to apply to the social, as well as the vegetable system. It appears to be a general rule, that what is to last long should be slowly matured and gradually improved, while every sudden effort, however gigantic, to bring about the speedy execution of a plan calculated to endure for ages, is doomed to exhibit symptoms of premature decay from its very commencement. Thus, in a beautiful Oriental tale, a dervise explains to the sultan how he had reared the magnificent trees among which they walked, by nursing their shoots from the seed; and the prince’s pride is damped when he reflects, that those plantations, so simply raised, were gathering new vigour from each returning sun, while his own exhausted cedars, which had been transplanted by one violent effort, were drooping their majestic heads in the Valley of Orez. [Footnote: Tale of Mirglip the Persian, in the Tales of the Genii.]

It has been allowed, I believe, by all men of taste, many of whom have been late visitants of Constantinople, that if it were possible to survey the whole globe with a view to fixing a seat of universal empire, all who are capable of making such a choice, would give their preference to the city of Constantine, as including the great recommendations of beauty, wealth, security, and eminence. Yet with all these advantages of situation and climate, and with all the architectural splendour of its churches and halls, its quarries of marble, and its treasure-houses of gold, the imperial founder must himself have learned, that although he could employ all these rich materials in obedience to his own wish, it was the mind of man itself, those intellectual faculties refined by the ancients to the highest degree, which had produced the specimens of talent at which men paused and wondered, whether as subjects of art or of moral labour. The power of the Emperor might indeed strip other cities of their statues and their shrines, in order to decorate that which he had fixed upon as his new capital; but the men who had performed great actions, and those, almost equally esteemed, by whom such deeds were celebrated, in poetry, in painting, and in music, had ceased to exist. The nation, though still the most civilised in the world, had passed beyond that period of society, when the desire of fair fame is of itself the sole or chief motive for the labour of the historian or the poet, the painter or the statuary. The slavish and despotic constitution introduced into the empire, had long since entirely destroyed that public spirit which animated the free history of Rome, leaving nothing but feeble recollections, which produced no emulation.

To speak as of an animated substance, if Constantine could have regenerated his new metropolis, by transfusing into it the vital and vivifying principles of old Rome,–that brilliant spark no longer remained for Constantinople to borrow, or for Rome to lend.