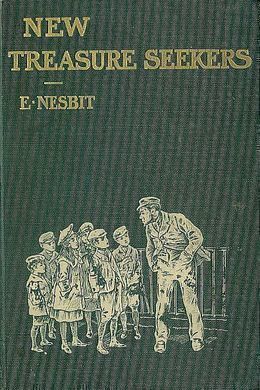 The Bastable Children in Search of a Fortune

As if the remarkable collections of children’s adventures The Story of the Treasure Seekers and The Wouldbegoods weren’t enough! Nesbit’s third book of this series finishes the delightful trilogy by this famous fantasy author. Oswald, Dora, Dicky, Alice, H.O, and Noel fill their free time with entertainments that don’t always turn out as they plan. But whether telling fortunes at a fete, unwittingly assisting an elopement, reforming their nasty cousin Archibald or even getting arrested, it is all good fun, and usually in a good cause.

We Bastables have only two uncles, and neither of them, are our own natural-born relatives. One is a great-uncle, and the other is the uncle from his birth of Albert, who used to live next door to us in the Lewisham Road. When we first got to know him (it was over some baked potatoes, and is quite another story) we called him Albert-next-door’s-Uncle, and then Albert’s uncle for short. But Albert’s uncle and my father joined in taking a jolly house in the country, called the Moat House, and we stayed there for our summer holidays; and it was there, through an accident to a pilgrim with peas in his shoes–that’s another story too–that we found Albert’s uncle’s long-lost love; and as she was very old indeed–twenty-six next birthday–and he was ever so much older in the vale of years, he had to get married almost directly, and it was fixed for about Christmas-time. And when our holidays came the whole six of us went down to the Moat House with Father and Albert’s uncle. We never had a Christmas in the country before. It was simply ripping. And the long-lost love–her name was Miss Ashleigh, but we were allowed to call her Aunt Margaret even before the wedding made it really legal for us to do so–she and her jolly clergyman brother used to come over, and sometimes we went to the Cedars, where they live, and we had games and charades, and hide-and-seek, and Devil in the Dark, which is a game girls pretend to like, and very few do really, and crackers and a Christmas-tree for the village children, and everything you can jolly well think of.

And all the time, whenever we went to the Cedars, there was all sorts of silly fuss going on about the beastly wedding; boxes coming from London with hats and jackets in, and wedding presents–all glassy and silvery, or else brooches and chains–and clothes sent down from London to choose from. I can’t think how a lady can want so many petticoats and boots and things just because she’s going to be married. No man would think of getting twenty-four shirts and twenty-four waistcoats, and so on, just to be married in.

“It’s because they’re going to Rome, I think,” Alice said, when we talked it over before the fire in the kitchen the day Mrs. Pettigrew went to see her aunt, and we were allowed to make toffee. “You see, in Rome you can only buy Roman clothes, and I think they’re all stupid bright colours–at least I know the sashes are. You stir now, Oswald. My face is all burnt black.”

Oswald took the spoon, though it was really not his turn by three; but he is one whose nature is so that he cannot make a fuss about little things–and he knows he can make toffee.

“It’s the dream of my life to go to Rome,” Noël said. Noël is our poet brother. “Just think of what the man says in the ‘Roman Road.’ I wish they’d take me.”

“They won’t,” Dicky said. “It costs a most awful lot. I heard Father saying so only yesterday.”

“It would only be the fare,” Noël answered; “and I’d go third, or even in a cattle-truck, or a luggage van. And when I got there I could easily earn my own living. I’d make ballads and sing them in the streets. The Italians would give me lyres–that’s the Italian kind of shilling, they spell it with an i. It shows how poetical they are out there, their calling it that.”

“But you couldn’t make Italian poetry,” H.O. said, staring at Noël with his mouth open.

“Oh, I don’t know so much about that,” Noël said. “I could jolly soon learn anyway, and just to begin with I’d do it in English. There are sure to be some people who would understand. And if they didn’t, don’t you think their warm Southern hearts would be touched to see a pale, slender, foreign figure singing plaintive ballads in an unknown tongue? I do. Oh! they’d chuck along the lyres fast enough–they’re not hard and cold like North people. Why, every one here is a brewer, or a baker, or a banker, or a butcher, or something dull. Over there they’re all bandits, or vineyardiners, or play the guitar, or something, and they crush the red grapes and dance and laugh in the sun–you know jolly well they do.”

“This toffee’s about done,” said Oswald suddenly. “H.O., shut your silly mouth and get a cupful of cold water.” And then, what with dropping a little of the toffee into the water to see if it was ready, and pouring some on a plate that wasn’t buttered and not being able to get it off again when it was cold without breaking the plate, and the warm row there was about its being one of the best dinner-service ones, the wild romances of Noël’s poetical intellect went out of our heads altogether; and it was not till later, and when deep in the waters of affliction, that they were brought back to us.