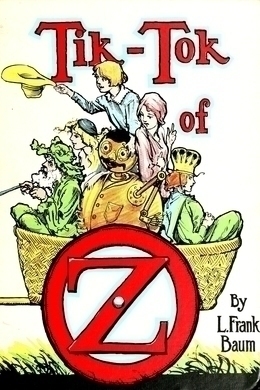 Join Tik-Tok, the Shaggy Man, and a host of other friends - both old and new - on an exciting, imaginative journey through the world of Oz. Betsy Bobbin, a girl from Oklahoma, is shipwrecked with her mule, Hank, in the Rose Kingdom of Oz. She meets the Shaggy Man there and the two try to rescue the Shaggy Man’s brother from the Nome King. This book is partly based upon Baum’s stage musical, The Tik-Tok Man of Oz, which was in turn based on Ozma of Oz.

“Some one must sweep it,” replied Ann’s younger sister, Salye; “else we shall soon be wading in dust. And you are the eldest, and the head of the family.”

“I’m Queen of Oogaboo,” said Ann, proudly. “But,” she added with a sigh, “my kingdom is the smallest and the poorest in all the Land of Oz.”

This was quite true. Away up in the mountains, in a far corner of the beautiful fairyland of Oz, lies a small valley which is named Oogaboo, and in this valley lived a few people who were usually happy and contented and never cared to wander over the mountain pass into the more settled parts of the land. They knew that all of Oz, including their own territory, was ruled by a beautiful Princess named Ozma, who lived in the splendid Emerald City; yet the simple folk of Oogaboo never visited Ozma. They had a royal family of their own–not especially to rule over them, but just as a matter of pride. Ozma permitted the various parts of her country to have their Kings and Queens and Emperors and the like, but all were ruled over by the lovely girl Queen of the Emerald City.

The King of Oogaboo used to be a man named Jol Jemkiph Soforth, who for many years did all the drudgery of deciding disputes and telling his people when to plant cabbages and pickle onions. But the King’s wife had a sharp tongue and small respect for the King, her husband; therefore one night King Jol crept over the pass into the Land of Oz and disappeared from Oogaboo for good and all. The Queen waited a few years for him to return and then started in search of him, leaving her eldest daughter, Ann Soforth, to act as Queen.

Now, Ann had not forgotten when her birthday came, for that meant a party and feasting and dancing, but she had quite forgotten how many years the birthdays marked. In a land where people live always, this is not considered a cause for regret, so we may justly say that Queen Ann of Oogaboo was old enough to make jelly–and let it go at that.

But she didn’t make jelly, or do any more of the housework than she could help. She was an ambitious woman and constantly resented the fact that her kingdom was so tiny and her people so stupid and unenterprising. Often she wondered what had become of her father and mother, out beyond the pass, in the wonderful Land of Oz, and the fact that they did not return to Oogaboo led Ann to suspect that they had found a better place to live. So, when Salye refused to sweep the floor of the living room in the palace, and Ann would not sweep it, either, she said to her sister:

“I’m going away. This absurd Kingdom of Oogaboo tires me.”

“Go, if you want to,” answered Salye; “but you are very foolish to leave this place.”

“Because in the Land of Oz, which is Ozma’s country, you will be a nobody, while here you are a Queen.”

“Well, there are certainly more people than that in the great Land of Oz,” laughed Salye. “Why don’t you raise an army and conquer them, and be Queen of all Oz?” she asked, trying to taunt Ann and so to anger her. Then she made a face at her sister and went into the back yard to swing in the hammock.

Her jeering words, however, had given Queen Ann an idea. She reflected that Oz was reported to be a peaceful country and Ozma a mere girl who ruled with gentleness to all and was obeyed because her people loved her. Even in Oogaboo the story was told that Ozma’s sole army consisted of twenty-seven fine officers, who wore beautiful uniforms but carried no weapons, because there was no one to fight. Once there had been a private soldier, besides the officers, but Ozma had made him a Captain-General and taken away his gun for fear it might accidentally hurt some one.

The more Ann thought about the matter the more she was convinced it would be easy to conquer the Land of Oz and set herself up as Ruler in Ozma’s place, if she but had an Army to do it with. Afterward she could go out into the world and conquer other lands, and then perhaps she could find a way to the moon, and conquer that. She had a warlike spirit that preferred trouble to idleness.

It all depended on an Army, Ann decided. She carefully counted in her mind all the men of her kingdom. Yes; there were exactly eighteen of them, all told. That would not make a very big Army, but by surprising Ozma’s unarmed officers her men might easily subdue them. “Gentle people are always afraid of those that bluster,” Ann told herself. “I don’t wish to shed any blood, for that would shock my nerves and I might faint; but if we threaten and flash our weapons I am sure the people of Oz will fall upon their knees before me and surrender.”

This argument, which she repeated to herself more than once, finally determined the Queen of Oogaboo to undertake the audacious venture.