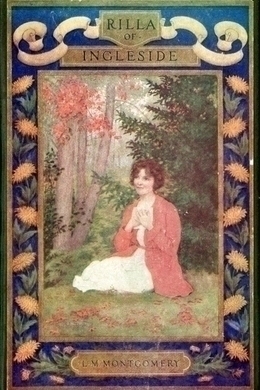 Anne’s children were almost grown up, except for pretty, high-spirited Rilla. No one could resist her bright hazel eyes and dazzling smile. Rilla, almost fifteen, can’t think any further ahead than going to her very first dance at the Four Winds lighthouse and getting her first kiss from handsome Kenneth Ford. But undreamed-of challenges await the irrepressible Rilla when the world of Ingleside becomes endangered by a far-off war. Her brothers go off to fight, and Rilla brings home an orphaned newborn in a soup tureen. She is swept into a drama that tests her courage and leaves her changed forever.

It was a warm, golden-cloudy, lovable afternoon. In the big living-room at Ingleside Susan Baker sat down with a certain grim satisfaction hovering about her like an aura; it was four o’clock and Susan, who had been working incessantly since six that morning, felt that she had fairly earned an hour of repose and gossip. Susan just then was perfectly happy; everything had gone almost uncannily well in the kitchen that day. Dr. Jekyll had not been Mr. Hyde and so had not grated on her nerves; from where she sat she could see the pride of her heart–the bed of peonies of her own planting and culture, blooming as no other peony plot in Glen St. Mary ever did or could bloom, with peonies crimson, peonies silvery pink, peonies white as drifts of winter snow.

Susan had on a new black silk blouse, quite as elaborate as anything Mrs. Marshall Elliott ever wore, and a white starched apron, trimmed with complicated crocheted lace fully five inches wide, not to mention insertion to match. Therefore Susan had all the comfortable consciousness of a well-dressed woman as she opened her copy of the Daily Enterprise and prepared to read the Glen “Notes” which, as Miss Cornelia had just informed her, filled half a column of it and mentioned almost everybody at Ingleside. There was a big, black headline on the front page of the Enterprise, stating that some Archduke Ferdinand or other had been assassinated at a place bearing the weird name of Sarajevo, but Susan tarried not over uninteresting, immaterial stuff like that; she was in quest of something really vital. Oh, here it was–“Jottings from Glen St. Mary.” Susan settled down keenly, reading each one over aloud to extract all possible gratification from it.

Mrs. Blythe and her visitor, Miss Cornelia–alias Mrs. Marshall Elliott–were chatting together near the open door that led to the veranda, through which a cool, delicious breeze was blowing, bringing whiffs of phantom perfume from the garden, and charming gay echoes from the vine-hung corner where Rilla and Miss Oliver and Walter were laughing and talking. Wherever Rilla Blythe was, there was laughter.

There was another occupant of the living-room, curled up on a couch, who must not be overlooked, since he was a creature of marked individuality, and, moreover, had the distinction of being the only living thing whom Susan really hated.

All cats are mysterious but Dr. Jekyll-and-Mr. Hyde–“Doc” for short–was trebly so. He was a cat of double personality–or else, as Susan vowed, he was possessed by the devil. To begin with, there had been something uncanny about the very dawn of his existence. Four years previously Rilla Blythe had had a treasured darling of a kitten, white as snow, with a saucy black tip to its tail, which she called Jack Frost. Susan disliked Jack Frost, though she could not or would not give any valid reason therefor.

“Take my word for it, Mrs. Dr. dear,” she was wont to say ominously, “that cat will come to no good.”

“But why do you think so?” Mrs. Blythe would ask.

“I do not think–I know,” was all the answer Susan would vouchsafe.

With the rest of the Ingleside folk Jack Frost was a favourite; he was so very clean and well groomed, and never allowed a spot or stain to be seen on his beautiful white suit; he had endearing ways of purring and snuggling; he was scrupulously honest.

And then a domestic tragedy took place at Ingleside. Jack Frost had kittens!

It would be vain to try to picture Susan’s triumph. Had she not always insisted that that cat would turn out to be a delusion and a snare? Now they could see for themselves!

Rilla kept one of the kittens, a very pretty one, with peculiarly sleek glossy fur of a dark yellow crossed by orange stripes, and large, satiny, golden ears. She called it Goldie and the name seemed appropriate enough to the little frolicsome creature which, during its kittenhood, gave no indication of the sinister nature it really possessed. Susan, of course, warned the family that no good could be expected from any offspring of that diabolical Jack Frost; but Susan’s Cassandra-like croakings were unheeded.

The Blythes had been so accustomed to regard Jack Frost as a member of the male sex that they could not get out of the habit. So they continually used the masculine pronoun, although the result was ludicrous. Visitors used to be quite electrified when Rilla referred casually to “Jack and his kitten,” or told Goldie sternly, “Go to your mother and get him to wash your fur.”

“It is not decent, Mrs. Dr. dear,” poor Susan would say bitterly. She herself compromised by always referring to Jack as “it” or “the white beast,” and one heart at least did not ache when “it” was accidentally poisoned the following winter.