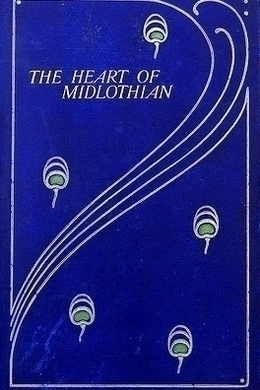 The Heart of Midlothian

This novel, regarded as one of Scott’s finest, opens with the Edinburgh riots of 1736. The people have been infuriated by the actions of John Porteous, Captain of the Guard; when his life is saved by the distant monarch they ignore the Queen and resolve to take their own revenge. Closely connected with these events is the story of the novel’s heroine, Jeanie Deans, a peasant girl of remarkable religious faith. Like the people of Edinburgh she refuses to accept a legal decision, in this case against her sister Effie, condemned under a harsh law of child-murder. The novel follows Jeanie’s prodigious determination to save her sister’s life. At the centre of both narratives is Edinburgh’s forbidding prison, the Tolbooth, known by all as the Heart of Midlothian.

In former times, England had her Tyburn, to which the devoted victims of justice were conducted in solemn procession up what is now called Oxford Street. In Edinburgh, a large open street, or rather oblong square, surrounded by high houses, called the Grassmarket, was used for the same melancholy purpose. It was not ill chosen for such a scene, being of considerable extent, and therefore fit to accommodate a great number of spectators, such as are usually assembled by this melancholy spectacle. On the other hand, few of the houses which surround it were, even in early times, inhabited by persons of fashion; so that those likely to be offended or over deeply affected by such unpleasant exhibitions were not in the way of having their quiet disturbed by them. The houses in the Grassmarket are, generally speaking, of a mean description; yet the place is not without some features of grandeur, being overhung by the southern side of the huge rock on which the Castle stands, and by the moss-grown battlements and turreted walls of that ancient fortress.

It was the custom, until within these thirty years or thereabouts, to use this esplanade for the scene of public executions. The fatal day was announced to the public by the appearance of a huge black gallows-tree towards the eastern end of the Grassmarket. This ill-omened apparition was of great height, with a scaffold surrounding it, and a double ladder placed against it, for the ascent of the unhappy criminal and executioner. As this apparatus was always arranged before dawn, it seemed as if the gallows had grown out of the earth in the course of one night, like the production of some foul demon; and I well remember the fright with which the schoolboys, when I was one of their number, used to regard these ominous signs of deadly preparation. On the night after the execution the gallows again disappeared, and was conveyed in silence and darkness to the place where it was usually deposited, which was one of the vaults under the Parliament House, or courts of justice. This mode of execution is now exchanged for one similar to that in front of Newgate,–with what beneficial effect is uncertain. The mental sufferings of the convict are indeed shortened. He no longer stalks between the attendant clergymen, dressed in his grave-clothes, through a considerable part of the city, looking like a moving and walking corpse, while yet an inhabitant of this world; but, as the ultimate purpose of punishment has in view the prevention of crimes, it may at least be doubted, whether, in abridging the melancholy ceremony, we have not in part diminished that appalling effect upon the spectators which is the useful end of all such inflictions, and in consideration of which alone, unless in very particular cases, capital sentences can be altogether justified.

On the 7th day of September 1736, these ominous preparations for execution were descried in the place we have described, and at an early hour the space around began to be occupied by several groups, who gazed on the scaffold and gibbet with a stern and vindictive show of satisfaction very seldom testified by the populace, whose good nature, in most cases, forgets the crime of the condemned person, and dwells only on his misery. But the act of which the expected culprit had been convicted was of a description calculated nearly and closely to awaken and irritate the resentful feelings of the multitude. The tale is well known; yet it is necessary to recapitulate its leading circumstances, for the better understanding what is to follow; and the narrative may prove long, but I trust not uninteresting even to those who have heard its general issue. At any rate, some detail is necessary, in order to render intelligible the subsequent events of our narrative.