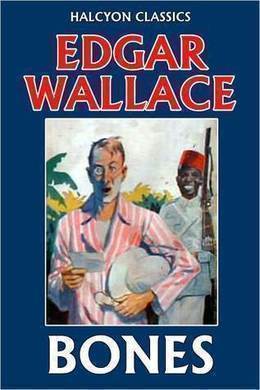 It is a time when the major world powers are vying for colonial honors, a time of ju-ju, witch doctors, and an uneasy peace with Bosambo, impressive chief of the Ochori. When Commissioner Sanders goes on leave, the trusty Lieutenant Hamilton takes over administration of the African territories. However, yet again, the trouble-prone Francis Augustus Tibbetts, known as Bones, while meaning to assist, only manages to spread his own unique style of innocent and endearing mischief.

Sanders turned to the rail and cast a wistful glance at the low-lying shore. He saw one corner of the white Residency, showing through the sparse isisi palm at the end of the big garden–a smudge of green on yellow from this distance.

“I hate going–even for six months,” he said.

“Oh, yes, I shall come back again,” said Sanders, answering the question in the tune. “I hope things will go well in my absence.”

“How can they go well?” asked Hamilton, gently. “How can the Isisi live, or the Akasava sow his barbarous potatoes, or the sun shine, or the river run when Sandi Sitani is no longer in the land?”

“I wouldn’t have worried,” Sanders went on, ignoring the insult, “if they’d put a good man in charge; but to give a pudden-headed soldier—-“

“We thank you!” bowed Hamilton.

”—-with little or no experience—-“

“To put him in my place!” apostrophized Sanders, tilting back his helmet the better to appeal to the heavens.

“‘Orrible! ‘Orrible!” said Hamilton; “and now I seem to catch the accusing eye of the chief officer, which means that he wants me to hop. God bless you, old man!”

His sinewy paw caught the other’s in a grip that left both hands numb at the finish.

“Keep well,” said Sanders in a low voice, his hand on Hamilton’s back, as they walked to the gangway. “Watch the Isisi and sit on Bosambo–especially Bosambo, for he is a mighty slippery devil.”

“Leave me to deal with Bosambo,” said Hamilton firmly, as he skipped down the companion to the big boat that rolled and tumbled under the coarse skin of the ship.

“I am leaving you,” said Sanders, with a chuckle.

He watched the Houssa pick a finnicking way to the stern of the boat; saw the solemn faces of his rowmen as they bent their naked backs, gripping their clumsy oars. And to think that they and Hamilton were going back to the familiar life, to the dear full days he knew! Sanders coughed and swore at himself.

“Oh, Sandi!” called the headman of the boat, as she went lumbering over the clear green swell, “remember us, your servants!”

“I will remember, man,” said Sanders, a-choke, and turned quickly to his cabin.

Hamilton sat in the stern of the surf-boat, humming a song to himself; but he felt awfully solemn, though in his pocket reposed a commission sealed redly and largely on parchment and addressed to: “Our well-beloved Patrick George Hamilton, Lieutenant, of our 133rd 1st Royal Hertford Regiment. Seconded for service in our 9th Regiment of Houssas–Greeting….”

“Master,” said his Kroo servant, who waited his landing, “you lib for dem big house?”

“Dem big house,” was the Residency, in which a temporarily appointed Commissioner must take up his habitation, if he is to preserve the dignity of his office.

“Let us pray!” said Hamilton earnestly, addressing himself to a small snapshot photograph of Sanders, which stood on a side table. “Let us pray that the barbarian of his kindness will sit quietly till you return, my Sanders–for the Lord knows what trouble I’m going to get into before you return!”

The incoming mail brought Francis Augustus Tibbetts, Lieutenant of the Houssas, raw to the land, but as cheerful as the devil–a straight stick of a youth, with hair brushed back from his forehead, a sun-peeled nose, a wonderful collection of baggage, and all the gossip of London.

“I’m afraid you’ll find I’m rather an ass, sir,” he said, saluting stiffly. “I’ve only just arrived on the Coast an’ I’m simply bubbling over with energy, but I’m rather short in the brain department.”

Hamilton, glaring at his subordinate through his monocle, grinned sympathetically.

“I’m not a whale of erudition myself,” he confessed. “What is your name, sir?”

“I shall call you Bones,” said Hamilton, decisively.

Lieut. Tibbetts saluted. “They called me Conk at Sandhurst, sir,” he suggested.

“Bones it is, skipper,” said Mr. Tibbetts; “an’ now all this beastly formality is over we’ll have a bottle to celebrate things.” And a bottle they had.

It was a splendid evening they spent, dining on chicken and palm-oil chop, rice pudding and sweet potatoes. Hamilton sang, “Who wouldn’t be a soldier in the Army?” and–by request–in his shaky falsetto baritone, “My heart is in the Highlands”; and Lieut. Tibbetts gave a lifelike imitation of Frank Tinney, which convulsed, not alone his superior officer, but some two-and-forty men of the Houssas who were unauthorized spectators through various windows and door cracks and ventilating gauzes.