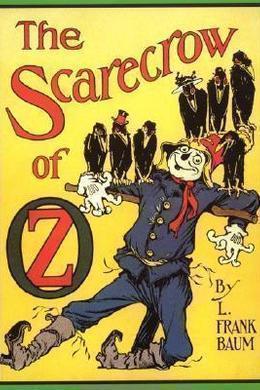 The Scarecrow of Oz

L Frank Baum considered The Scarecrow of Oz to be his best book. It opens with Trot and Cap’n Bill rowing along a shore of the Pacific Ocean, a mighty whirlpool engulfs them and sinks their boat. The old sailorman and the little girl are miraculously saved and regain consciousness to find themselves in a sea cavern. (To this day, Trot asserts she felt mermaid arms about her during those terrible moments under water.) They experience one perilous adventure after another until eventually they make their way to Jinxland and meet the Scarecrow who takes charge of things once Cap’n Bill is transformed into a tiny grasshopper with a wooden leg. Will the Captain remain a grasshopper or will Trot, the Scarecrow, and their friends be able to restore him to his former shape and life?

“Seems to me,” said Cap’n Bill, as he sat beside Trot under the big acacia tree, looking out over the blue ocean, “seems to me, Trot, as how the more we know, the more we find we don’t know.”

“I can’t quite make that out, Cap’n Bill,” answered the little girl in a serious voice, after a moment’s thought, during which her eyes followed those of the old sailor-man across the glassy surface of the sea. “Seems to me that all we learn is jus’ so much gained.”

“I know; it looks that way at first sight,” said the sailor, nodding his head; “but those as knows the least have a habit of thinkin’ they know all there is to know, while them as knows the most admits what a turr’ble big world this is. It’s the knowing ones that realize one lifetime ain’t long enough to git more’n a few dips o’ the oars of knowledge.”

Trot didn’t answer. She was a very little girl, with big, solemn eyes and an earnest, simple manner. Cap’n Bill had been her faithful companion for years and had taught her almost everything she knew.

He was a wonderful man, this Cap’n Bill. Not so very old, although his hair was grizzled–what there was of it. Most of his head was bald as an egg and as shiny as oilcloth, and this made his big ears stick out in a funny way. His eyes had a gentle look and were pale blue in color, and his round face was rugged and bronzed. Cap’n Bill’s left leg was missing, from the knee down, and that was why the sailor no longer sailed the seas. The wooden leg he wore was good enough to stump around with on land, or even to take Trot out for a row or a sail on the ocean, but when it came to “runnin’ up aloft” or performing active duties on shipboard, the old sailor was not equal to the task. The loss of his leg had ruined his career and the old sailor found comfort in devoting himself to the education and companionship of the little girl.

The accident to Cap’n Bill’s leg bad happened at about the time Trot was born, and ever since that he had lived with Trot’s mother as “a star boarder,” having enough money saved up to pay for his weekly “keep.” He loved the baby and often held her on his lap; her first ride was on Cap’n Bill’s shoulders, for she had no baby-carriage; and when she began to toddle around, the child and the sailor became close comrades and enjoyed many strange adventures together. It is said the fairies had been present at Trot’s birth and had marked her forehead with their invisible mystic signs, so that she was able to see and do many wonderful things.

The acacia tree was on top of a high bluff, but a path ran down the bank in a zigzag way to the water’s edge, where Cap’n Bill’s boat was moored to a rock by means of a stout cable. It had been a hot, sultry afternoon, with scarcely a breath of air stirring, so Cap’n Bill and Trot had been quietly sitting beneath the shade of the tree, waiting for the sun to get low enough for them to take a row.

They had decided to visit one of the great caves which the waves had washed out of the rocky coast during many years of steady effort. The caves were a source of continual delight to both the girl and the sailor, who loved to explore their awesome depths.

The old man cast a shrewd glance at the sky, the sea and the motionless boat. Then he shook his head.

“Mebbe it’s time, Trot,” he answered, “but I don’t jes’ like the looks o’ things this afternoon.”

“Can’t say as to that. Things is too quiet to suit me, that’s all. No breeze, not a ripple a-top the water, nary a gull a-flyin’ anywhere, an’ the end o’ the hottest day o’ the year. I ain’t no weather-prophet, Trot, but any sailor would know the signs is ominous.”

“There’s nothing wrong that I can see,” said Trot.

“If there was a cloud in the sky even as big as my thumb, we might worry about it; but–look, Cap’n!–the sky is as clear as can be.”

He looked again and nodded.

“P’r’aps we can make the cave, all right,” he agreed, not wishing to disappoint her. “It’s only a little way out, an’ we’ll be on the watch; so come along, Trot.”

Together they descended the winding path to the beach. It was no trouble for the girl to keep her footing on the steep way, but Cap’n Bill, because of his wooden leg, had to hold on to rocks and roots now and then to save himself from tumbling. On a level path he was as spry as anyone, but to climb up hill or down required some care.