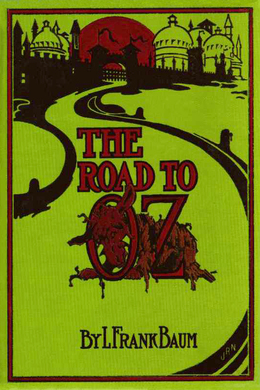 The Road to Oz

Dorothy and her friend, Polychrome, find themselves on a road through some strange places, to the Land of the Winkies, and on to beautiful Emerald City. But why are they there, and how did they get there? Princess Ozma of Oz sent for them, and the Cowardly Lion and the Scarecrow, of course, to take part in her lavish birthday celebration.

“Please, miss,” said the shaggy man, “can you tell me the road to Butterfield?”

Dorothy looked him over. Yes, he was shaggy, all right; but there was a twinkle in his eye that seemed pleasant.

“You cross the ten-acre lot, follow the lane to the highway, go north to the five branches, and take–let me see–”

“To be sure, miss; see as far as Butterfield, if you like,” said the shaggy man.

“You take the branch next the willow stump, I b’lieve; or else the branch by the gopher holes; or else—-“

“‘Course not, Shaggy Man. You must take the right road to get to Butterfield.”

“And is that the one by the gopher stump, or—-“

“Dear me!” cried Dorothy; “I shall have to show you the way; you’re so stupid. Wait a minute till I run in the house and get my sunbonnet.”

The shaggy man waited. He had an oat-straw in his mouth, which he chewed slowly as if it tasted good; but it didn’t. There was an apple-tree beside the house, and some apples had fallen to the ground. The shaggy man thought they would taste better than the oat-straw, so he walked over to get some. A little black dog with bright brown eyes dashed out of the farm-house and ran madly toward the shaggy man, who had already picked up three apples and put them in one of the big wide pockets of his shaggy coat. The little dog barked, and made a dive for the shaggy man’s leg; but he grabbed the dog by the neck and put it in his big pocket along with the apples. He took more apples, afterward, for many were on the ground; and each one that he tossed into his pocket hit the little dog somewhere upon the head or back, and made him growl. The little dog’s name was Toto, and he was sorry he had been put in the shaggy man’s pocket.

Pretty soon Dorothy came out of the house with her sunbonnet, and she called out:

“Come on, Shaggy Man, if you want me to show you the road to Butterfield.” She climbed the fence into the ten-acre lot and he followed her, walking slowly and stumbling over the little hillocks in the pasture as if he was thinking of something else and did not notice them.

“My, but you’re clumsy!” said the little girl. “Are your feet tired?”

“No, miss; it’s my whiskers; they tire very easily this warm weather,” said he. “I wish it would snow; don’t you?”

“‘Course not, Shaggy Man,” replied Dorothy, giving him a severe look. “If it snowed in August it would spoil the corn and the oats and the wheat; and then Uncle Henry wouldn’t have any crops; and that would make him poor; and—-“

“Yes,” replied Dorothy, climbing another fence; “I’ll go as far as the highway with you.”

“Thankee, miss; you’re very kind for your size, I’m sure,” said he gratefully.

“It isn’t everyone who knows the road to Butterfield,” Dorothy remarked as she tripped along the lane; “but I’ve driven there many a time with Uncle Henry, and so I b’lieve I could find it blindfolded.”

“Don’t do that, miss,” said the shaggy man, earnestly; “you might make a mistake.”

“I won’t,” she answered, laughing. “Here’s the highway. Now, it’s the second–no, the third turn to the left–or else it’s the fourth. Let’s see. The first one is by the elm tree; and the second is by the gopher holes; and then—-“

“Then what?” he inquired, putting his hands in his coat pockets. Toto grabbed a finger and bit it; the shaggy man took his hand out of that pocket quickly, and said “Oh!”

Dorothy did not notice. She was shading her eyes from the sun with her arm, looking anxiously down the road.

“Come on,” she commanded. “It’s only a little way farther, so I may as well show you.”

After a while they came to the place where five roads branched in different directions; Dorothy pointed to one, and said:

“I’m much obliged, miss,” he said, and started along another road.

“I thought you said that other was the road to Butterfield,” said he, running his fingers through his shaggy whiskers in a puzzled way.

“But I don’t want to go to Butterfield, miss.”

“Of course not. I wanted you to show me the road, so I shouldn’t go there by mistake.”