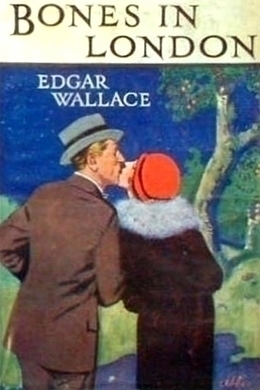 After a tour of duty overseas, the eccentric character Augustus Tibbetts (known as ‘Bones’ to his associates) returns to London to embark on civilian life. In a series of loosely connected but consistently hilarious tales and vignettes, Bones inadvertently stumbles into a series of improbable but exciting adventures and too-good-to-be-true business ventures.

There was a slump in the shipping market, and men who were otherwise decent citizens wailed for one hour of glorious war, when Kenyon Line Deferred had stood at 88 1/2, and even so poor an organization as Siddons Steam Packets Line had been marketable at 3 3/8.

Two bareheaded men came down the busy street, their hands thrust into their trousers pockets, their sleek, well-oiled heads bent in dejection.

No word they spoke, keeping step with the stern precision of soldiers. Together they wheeled through the open doors of the Commercial Trust Building, together they left-turned into the elevator, and simultaneously raised their heads to examine its roof, as though in its panelled ceiling was concealed some Delphic oracle who would answer the riddle which circumstances had set them.

They dropped their heads together and stood with sad eyes, regarding the attendant’s leisurely unlatching of the gate. They slipped forth and walked in single file to a suite of offices inscribed “Pole Brothers, Brokers,” and, beneath, “The United Merchant Shippers’ Corporation,” and passed through a door which, in addition to this declaration, bore the footnote “Private.”

Here the file divided, one going to one side of a vast pedestal desk and one to the other. Still with their hands pushed deep into their pockets, they sank, almost as at a word of command, each into his cushioned chair, and stared at one another across the table.

They were stout young men of the middle thirties, clean-shaven and ruddy. They had served their country in the late War, and had made many sacrifices to the common cause. One had worn uniform and one had not. Joe had occupied some mysterious office which permitted and, indeed, enjoined upon him the wearing of the insignia of captain, but had forbidden him to leave his native land. The other had earned a little decoration with a very big title as a buyer of boots for Allied nations. Both had subscribed largely to War Stock, and a reminder of their devotion to the cause of liberty was placed to their credit every half-year.

But for these, war, with its horrific incidents, its late hours, its midnight railway journeys by trains on which sleeping berths could not be had for love or money, its food cards and statements of excess profits, was past. The present held its tragedy so poignant as to overshadow that breathless terrifying moment when peace had come and found the firm with the sale of the Fairy Line of cargo steamers uncompleted, contracts unsigned, and shipping stock which had lived light-headedly in the airy spaces, falling deflated on the floor of the house.

“Joe,” said the senior Mr. Pole, in a voice that came from his varnished boots, “we’ve got to do something with Fairies.”

“Curse this War!” said Joe in cold-blooded even tones. “Curse the Kaiser! A weak-kneed devil who might at least have stuck to it for another month! Curse him for making America build ships, curse him for—-“

“Joe,” said the stout young man on the other side of the table, shaking his head sadly, “it is no use cursing, Joe. We knew that they were building ships, but the business looked good to me. If Turkey hadn’t turned up her toes and released all that shipping—-“

“Curse Turkey!” said the other, with great calmness. “Curse the Sultan and Enver and Taalat, curse Bulgaria and Ferdinand—-“

“Put in one for the Bolsheviks, Joe,” said his brother urgently, “and I reckon that gets the lot in trouble. Don’t start on Austria, or we’ll find ourselves cursing the Jugo-Slavs.”

He sighed deeply, pursed his lips, and looked at his writing-pad intently.

Joe and Fred Pole had many faults, which they freely admitted, such as their generosity, their reckless kindness of heart, their willingness to do their worst enemies a good turn, and the like. They had others which they never admitted, but which were none the less patent to their prejudiced contemporaries.

But they had virtues which were admirable. They were, for example, absolutely loyal to one another, and were constant in their mutual admiration and help. If Joe made a bad deal, Fred never rested until he had balanced things against the beneficiary. If Fred in a weak moment paid a higher price to the vendor of a property than he, as promoter, could afford, it was Joe who took the smug vendor out to dinner and, by persuasion, argument, and the frank expression of his liking for the unfortunate man, tore away a portion of his ill-gotten gains.