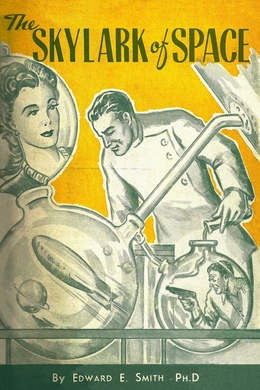 The Skylark of Space

Brilliant government scientist Richard Seaton discovers a remarkable faster-than-light fuel that will power his interstellar spaceship, The Skylark. His ruthless rival, Marc DuQuesne, and the sinister World Steel Corporation will do anything to get their hands on the fuel. They kidnap Seaton’s fiancée and friends, unleashing a furious pursuit and igniting a burning desire for revenge that will propel The Skylark across the galaxy and back. The Skylark of Space is the first and one of the best space operas ever written. Breezy dialogue, romantic intrigue, fallible heroes, and complicated villains infuse humanity and believability into a conflict of galactic proportions.

Petrified with astonishment, Richard Seaton stared after the copper steam-bath upon which, a moment before, he had been electrolyzing his solution of “X,” the unknown metal. As soon as he had removed the beaker with its precious contents the heavy bath had jumped endwise from under his hand as though it were alive. It had flown with terrific speed over the table, smashing a dozen reagent-bottles on its way, and straight on out through the open window. Hastily setting the beaker down, he seized his binoculars and focused them upon the flying bath, which now, to the unaided vision, was merely a speck in the distance. Through the glass he saw that it did not fall to the ground, but continued on in a straight line, its rapidly diminishing size alone showing the enormous velocity at which it was moving. It grew smaller and smaller. In a few seconds it disappeared.

Slowly lowering the binoculars to his side, Seaton turned like a man in a trance. He stared dazedly, first at the litter of broken bottles covering the table, and then at the empty space under the hood where the bath had stood for so many years.

Aroused by the entrance of his laboratory helper, he silently motioned him to clean up the wreckage.

“Search me, Dan…. wish I knew, myself,” Seaton replied, absently, lost in wonder at what he had just seen.

Ferdinand Scott, a chemist from an adjoining laboratory, entered breezily.

“Hello, Dicky, thought I heard a rack–Good Lord! What you been celebrating? Had an explosion?”

“Uh-uh.” Seaton shook his head. “Something funny–darned funny. I can tell you what happened, but that’s all.”

He did so, and while he talked he prowled about the big room, examining minutely every instrument, dial, meter, gauge, and indicator in the place.

Scott’s face showed in turn interest, surprise, and pitying alarm. “Dick, boy, I don’t know why you wrecked the joint, and I don’t know whether that yarn came out of a bottle or a needle, but believe me, it stinks. It’s an honest-to-God, bottled-in-bond stinkeroo if I ever heard one. You’d better lay off the stuff, whatever it is.”

Seeing that Seaton was paying no attention to him, Scott left the room, shaking his head.

Seaton walked slowly to his desk, picked up his blackened and battered briar pipe, and sat down. What could possibly have happened, to result in such shattering of all the natural laws he knew? An inert mass of metal couldn’t fly off into space without the application of a force–in this case an enormous, a really tremendous force–a force probably of the order of magnitude of atomic energy. But it hadn’t been atomic energy. That was out. Definitely. No hard radiation…His instruments would have indicated and recorded a hundredth of a millimicrocurie, and every one of them had sat placidly on dead-center zero through the whole show. What was that force?

And where? In the cell? The solution? The bath? Those three places were…all the places there were.

Concentrating all the power of his mind–deaf, dumb, and blind to every external thing–he sat motionless, with his forgotten pipe clenched between his teeth.

Finally he stood up and turned on the lights. Tapping the stem of his pipe against his palm, he spoke aloud. “Absolutely the only unusual incidents in this whole job were a slight slopping over of the solution onto the copper and the short-circuiting of the wires when I grabbed the beaker…wonder if it will repeat….”

He took a piece of copper wire and dipped it into the solution of the mysterious metal. Upon withdrawing it he saw that the wire had changed its appearance, the X having apparently replaced a layer of the original metal. Standing well clear of the table, he touched the wire with the conductors. There was a slight spark, a snap, and it disappeared. Simultaneously there was a sharp sound, like that made by the impact of a rifle bullet, and Seaton saw with amazement a small round hole where the wire had gone completely through the heavy brick wall. There was power–and how!–but whatever it was, it was a fact. A demonstrable fact.