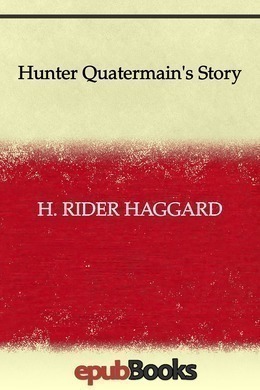 Quartermain (the main character from the many adventures found in the Alan Quartermain series) was a progressive Victorian big game hunter in Africa who championed the cause of the natives. Although Haggard often portrays Quatermain as being racist (at least in the light of our modern thinking), this short story gives us the full strengths, weaknesses, vision and prejudices of our adventurer, showing that his outlook to the locals is perhaps not quite what you’d expect.

Sir Henry Curtis, as everybody acquainted with him knows, is one of the most hospitable men on earth. It was in the course of the enjoyment of his hospitality at his place in Yorkshire the other day that I heard the hunting story which I am now about to transcribe. Many of those who read it will no doubt have heard some of the strange rumours that are flying about to the effect that Sir Henry Curtis and his friend Captain Good, R.N., recently found a vast treasure of diamonds out in the heart of Africa, supposed to have been hidden by the Egyptians, or King Solomon, or some other antique people. I first saw the matter alluded to in a paragraph in one of the society papers the day before I started for Yorkshire to pay my visit to Curtis, and arrived, needless to say, burning with curiosity; for there is something very fascinating to the mind in the idea of hidden treasure. When I reached the Hall, I at once asked Curtis about it, and he did not deny the truth of the story; but on my pressing him to tell it he would not, nor would Captain Good, who was also staying in the house.

“You would not believe me if I did,” Sir Henry said, with one of the hearty laughs which seem to come right out of his great lungs. “You must wait till Hunter Quatermain comes; he will arrive here from Africa to-night, and I am not going to say a word about the matter, or Good either, until he turns up. Quatermain was with us all through; he has known about the business for years and years, and if it had not been for him we should not have been here to-day. I am going to meet him presently.”

I could not get a word more out of him, nor could anybody else, though we were all dying of curiosity, especially some of the ladies. I shall never forget how they looked in the drawing-room before dinner when Captain Good produced a great rough diamond, weighing fifty carats or more, and told them that he had many larger than that. If ever I saw curiosity and envy printed on fair faces, I saw them then.

It was just at this moment that the door was opened, and Mr. Allan Quatermain announced, whereupon Good put the diamond into his pocket, and sprang at a little man who limped shyly into the room, convoyed by Sir Henry Curtis himself.

“Here he is, Good, safe and sound,” said Sir Henry, gleefully. “Ladies and gentlemen, let me introduce you to one of the oldest hunters and the very best shot in Africa, who has killed more elephants and lions than any other man alive.”

Everybody turned and stared politely at the curious-looking little lame man, and though his size was insignificant, he was quite worth staring at. He had short grizzled hair, which stood about an inch above his head like the bristles of a brush, gentle brown eyes, that seemed to notice everything, and a withered face, tanned to the colour of mahogany from exposure to the weather. He spoke, too, when he returned Good’s enthusiastic greeting, with a curious little accent, which made his speech noticeable.

It so happened that I sat next to Mr. Allan Quatermain at dinner, and, of course, did my best to draw him; but he was not to be drawn. He admitted that he had recently been a long journey into the interior of Africa with Sir Henry Curtis and Captain Good, and that they had found treasure, and then politely turned the subject and began to ask me questions about England, where he had never been before–that is, since he came to years of discretion. Of course, I did not find this very interesting, and so cast about for some means to bring the conversation round again.

Now, we were dining in an oak-panelled vestibule, and on the wall opposite to me were fixed two gigantic elephant tusks, and under them a pair of buffalo horns, very rough and knotted, showing that they came off an old bull, and having the tip of one horn split and chipped. I noticed that Hunter Quatermain’s eyes kept glancing at these trophies, and took an occasion to ask him if he knew anything about them.

“I ought to,” he answered, with a little laugh; “the elephant to which those tusks belonged tore one of our party right in two about eighteen months ago, and as for the buffalo horns, they were nearly my death, and were the end of a servant of mine to whom I was much attached. I gave them to Sir Henry when he left Natal some months ago;” and Mr. Quatermain sighed and turned to answer a question from the lady whom he had taken down to dinner, and who, needless to say, was also employed in trying to pump him about the diamonds.

Indeed, all round the table there was a simmer of scarcely suppressed excitement, which, when the servants had left the room, could no longer be restrained.

“Now, Mr. Quatermain,” said the lady next him, “we have been kept in an agony of suspense by Sir Henry and Captain Good, who have persistently refused to tell us a word of this story about the hidden treasure till you came, and we simply can bear it no longer; so, please, begin at once.”