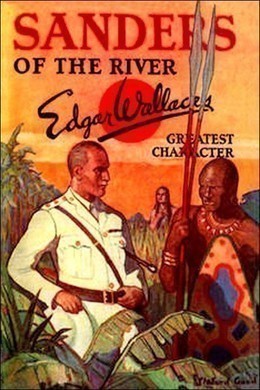 Sanders of the River

Charged with the task of engaging with the indigenous peoples of Nigeria during the colonial period, Sanders takes a no-nonsense approach that, though it may offend the sensibilities of current-day readers, is unquestionably effective. Offering readers an action-packed glimpse into a period of history that is often overlooked. Sanders of the River should be on the must-read list of every action-adventure junkie.

Mr. Commissioner Sanders had graduated to West Central Africa by such easy stages that he did not realise when his acquaintance with the back lands began. Long before he was called upon by the British Government to keep a watchful eye upon some quarter of a million cannibal folk, who ten years before had regarded white men as we regard the unicorn; he had met the Basuto, the Zulu, the Fingo, the Pondo, Matabele, Mashona, Barotse, Hottentot, and Bechuana. Then curiosity and interest took him westward and northward, and he met the Angola folk, then northward to the Congo, westward to the Masai, and finally, by way of the Pigmy people, he came to his own land.

Now, there is a subtle difference between all these races, a difference that only such men as Sanders know.

It is not necessarily a variety of colour, though some are brown and some yellow, and some–a very few–jet black. The difference is in character. By Sanders’ code you trusted all natives up to the same point, as you trust children, with a few notable exceptions. The Zulu were men, the Basuto were men, yet childlike in their grave faith. The black men who wore the fez were subtle, but trustworthy; but the browny men of the Gold Coast, who talked English, wore European clothing, and called one another “Mr.,” were Sanders’ pet abomination.

Living so long with children of a larger growth, it follows that he absorbed many of their childlike qualities. Once, on furlough in London, a confidence trick was played on him, and only his natural honesty pulled him out of a ridiculous scrape. For, when the gold-brick man produced his dull metal ingot, all Sanders’ moral nerves stood endways, and he ran the confiding “bunco steerer” to the nearest station, charging him, to the astonishment of a sorely-puzzled policeman, with “I.G.B.,” which means illicit gold buying. Sanders did not doubt that the ingot was gold, but he was equally certain that the gold was not honestly come by. His surprise when he found that the “gold” was gold-leaf imposed upon the lead of commerce was pathetic.

You may say of Sanders that he was a statesman, which means that he had no exaggerated opinion of the value of individual human life. When he saw a dead leaf on the plant of civilisation, he plucked it off, or a weed growing with his “flowers” he pulled it up, not stopping to consider the weed’s equal right to life. When a man, whether he was capita or slave, by his bad example endangered the peace of his country, Sanders fell upon him. In their unregenerate days, the Isisi called him “Ogani Isisi,” which means “The Little Butcher Bird,” and certainly in that time Sanders was prompt to hang. He governed a people three hundred miles beyond the fringe of civilisation. Hesitation to act, delay in awarding punishment, either of these two things would have been mistaken for weakness amongst a people who had neither power to reason, nor will to excuse, nor any large charity.

In the land which curves along the borders of Togo the people understand punishment to mean pain and death, and nothing else counts. There was a foolish Commissioner who was a great humanitarian, and he went up to Akasava–which is the name of this land–and tried moral suasion.

It was a raiding palaver. Some of the people of Akasava had crossed the river to Ochori and stolen women and goats, and I believe there was a man or two killed, but that is unimportant. The goats and the women were alive, and cried aloud for vengeance. They cried so loud that down at headquarters they were heard and Mr. Commissioner Niceman–that was not his name, but it will serve–went up to see what all the noise was about. He found the Ochori people very angry, but more frightened.

“If,” said their spokesman, “they will return our goats, they may keep the women, because the goats are very valuable.”

So Mr. Commissioner Niceman had a long, long palaver that lasted days and days, with the chief of the Akasava people and his councillors, and in the end moral suasion triumphed, and the people promised on a certain day, at a certain hour, when the moon was in such a quarter and the tide at such a height, the women should be returned and the goats also.

So Mr. Niceman returned to headquarters, swelling with admiration for himself and wrote a long report about his genius and his administrative abilities, and his knowledge of the native, which was afterwards published in Blue Book (Africa) 7943-96.

It so happened that Mr. Niceman immediately afterwards went home to England on furlough, so that he did not hear the laments and woeful wailings of the Ochori folk when they did not get their women or their goats.

Sanders, working round the Isisi River, with ten Houssas and an attack of malaria, got a helio message: