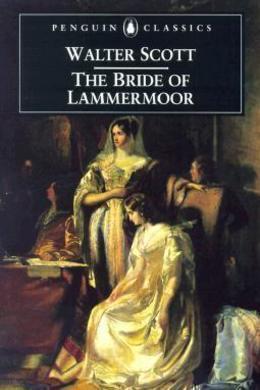 The Bride of Lammermoor

Dark prophecies and ominously symbolic events beset the romance of Edgar, Master of Ravenswood, and Lucy Ashton, daughter of the man who has displaced the ancient Ravenswood family from its ancestral home. Sir William Ashton, the wily and self-seeking Lord Keeper of the Great Seal of Scotland, has used his power to claim the Ravenswood estate, leaving Edgar to brood on his family’s wrongs in the lonely tower of Wolf’s Crag. His desire for vengeance is challenged and eventually defeated by his love for Sir William’s gentle daughter, but his new spirit of reconciliation is frustrated by political divisions and the determined opposition of Lucy’s domineering mother.

Few have been in my secret while I was compiling these narratives, nor is it probable that they will ever become public during the life of their author. Even were that event to happen, I am not ambitious of the honoured distinction, digito monstrari. I confess that, were it safe to cherish such dreams at all, I should more enjoy the thought of remaining behind the curtain unseen, like the ingenious manager of Punch and his wife Joan, and enjoying the astonishment and conjectures of my audience. Then might I, perchance, hear the productions of the obscure Peter Pattieson praised by the judicious and admired by the feeling, engrossing the young and attracting even the old; while the critic traced their fame up to some name of literary celebrity, and the question when, and by whom, these tales were written filled up the pause of conversation in a hundred circles and coteries. This I may never enjoy during my lifetime; but farther than this, I am certain, my vanity should never induce me to aspire.

I am too stubborn in habits, and too little polished in manners, to envy or aspire to the honours assigned to my literary contemporaries. I could not think a whit more highly of myself were I found worthy to “come in place as a lion” for a winter in the great metropolis. I could not rise, turn round, and show all my honours, from the shaggy mane to the tufted tail, “roar you an’t were any nightingale,” and so lie down again like a well-behaved beast of show, and all at the cheap and easy rate of a cup of coffee and a slice of bread and butter as thin as a wafer. And I could ill stomach the fulsome flattery with which the lady of the evening indulges her show-monsters on such occasions, as she crams her parrots with sugar-plums, in order to make them talk before company. I cannot be tempted to “come aloft” for these marks of distinction, and, like imprisoned Samson, I would rather remain–if such must be the alternative–all my life in the mill-house, grinding for my very bread, than be brought forth to make sport for the Philistine lords and ladies. This proceeds from no dislike, real or affected, to the aristocracy of these realms. But they have their place, and I have mine; and, like the iron and earthen vessels in the old fable, we can scarce come into collision without my being the sufferer in every sense. It may be otherwise with the sheets which I am now writing. These may be opened and laid aside at pleasure; by amusing themselves with the perusal, the great will excite no false hopes; by neglecting or condemning them, they will inflict no pain; and how seldom can they converse with those whose minds have toiled for their delight without doing either the one or the other.

In the better and wiser tone of feeling with Ovid only expresses in one line to retract in that which follows, I can address these quires–

Nor do I join the regret of the illustrious exile, that he himself could not in person accompany the volume, which he sent forth to the mart of literature, pleasure, and luxury. Were there not a hundred similar instances on record, the rate of my poor friend and school-fellow, Dick Tinto, would be sufficient to warn me against seeking happiness in the celebrity which attaches itself to a successful cultivator of the fine arts.