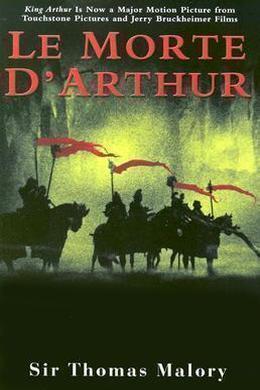 King Arthur and the Legends of the Round Table - Volume I

An immortal story of love, adventure, chivalry, treachery and death. Le Morte D’Arthur is Sir Thomas Malory’s unique and splendid version of the Arthurian legend. Mordred’s treason, the knightly exploits of Tristan, Lancelot’s fatally divided loyalties and his love for Guenever, the quest for the Holy Grail; all the elements are there woven into a wonderful completeness by the magic of his prose style. The result is not only one of the most readable accounts of the knights of the Round Table but also one of the most moving. As the story advances towards the inevitable tragedy of Arthur’s death the effect is cumulative, rising with an impending sense of doom and tragedy towards its shattering finale. This is volume 1, and Volume 2 is available here.

How Uther Pendragon sent for the duke of Cornwall and Igraine his wife, and of their departing suddenly again.

IT befell in the days of Uther Pendragon, when he was king of all England, and so reigned, that there was a mighty duke in Cornwall that held war against him long time. And the duke was called the Duke of Tintagil. And so by means King Uther sent for this duke, charging him to bring his wife with him, for she was called a fair lady, and a passing wise, and her name was called Igraine.

So when the duke and his wife were come unto the king, by the means of great lords they were accorded both. The king liked and loved this lady well, and he made them great cheer out of measure, and desired to have lain by her. But she was a passing good woman, and would not assent unto the king. And then she told the duke her husband, and said, I suppose that we were sent for that I should be dishonoured; wherefore, husband, I counsel you, that we depart from hence suddenly, that we may ride all night unto our own castle. And in like wise as she said so they departed, that neither the king nor none of his council were ware of their departing. All so soon as King Uther knew of their departing so suddenly, he was wonderly wroth. Then he called to him his privy council, and told them of the sudden departing of the duke and his wife.

Then they advised the king to send for the duke and his wife by a great charge; and if he will not come at your summons, then may ye do your best, then have ye cause to make mighty war upon him. So that was done, and the messengers had their answers; and that was this shortly, that neither he nor his wife would not come at him.

Then was the king wonderly wroth. And then the king sent him plain word again, and bade him be ready and stuff him and garnish him, for within forty days he would fetch him out of the biggest castle that he hath.

When the duke had this warning, anon he went and furnished and garnished two strong castles of his, of the which the one hight Tintagil, and the other castle hight Terrabil. So his wife Dame Igraine he put in the castle of Tintagil, and himself he put in the castle of Terrabil, the which had many issues and posterns out. Then in all haste came Uther with a great host, and laid a siege about the castle of Terrabil. And there he pight many pavilions, and there was great war made on both parties, and much people slain. Then for pure anger and for great love of fair Igraine the king Uther fell sick. So came to the king Uther Sir Ulfius, a noble knight, and asked the king why he was sick. I shall tell thee, said the king, I am sick for anger and for love of fair Igraine, that I may not be whole. Well, my lord, said Sir Ulfius, I shall seek Merlin, and he shall do you remedy, that your heart shall be pleased. So Ulfius departed, and by adventure he met Merlin in a beggar’s array, and there Merlin asked Ulfius whom he sought. And he said he had little ado to tell him. Well, said Merlin, I know whom thou seekest, for thou seekest Merlin; therefore seek no farther, for I am he; and if King Uther will well reward me, and be sworn unto me to fulfil my desire, that shall be his honour and profit more than mine; for I shall cause him to have all his desire. All this will I undertake, said Ulfius, that there shall be nothing reasonable but thou shalt have thy desire. Well, said Merlin, he shall have his intent and desire. And therefore, said Merlin, ride on your way, for I will not be long behind.