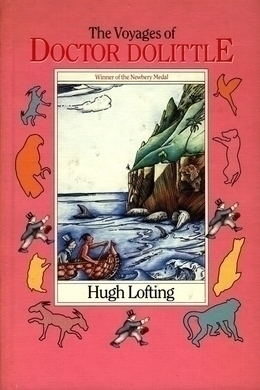 The Voyages of Doctor Dolittle

Doctor John Dolittle, the veterinarian who can actually talk to animals, sets sail on the high seas for new adventures! Accompanied by his young friend Tommy Stubbins and the beloved animals of his household – Polynesia the parrot, Jip the dog, and Chee-Chee the monkey – the good doctor is off to forbidding Spider Monkey Island to examine the rare jabizri beetle. But the mysterious island holds another, darker secret: The famous Indian naturalist, Long Arrow, has mysteriously disappeared – and Doctor Dolittle urgently needs to speak with him. Doctor Dolittle and his friends brave a shipwreck, find the floating island, and meet the incredible Great Glass Sea Snail – the keeper of the greatest mystery of all.

My name was Tommy Stubbins, son of Jacob Stubbins, the cobbler of Puddleby-on-the-Marsh; and I was nine and a half years old. At that time Puddleby was only quite a small town. A river ran through the middle of it; and over this river there was a very old stone bridge, called Kingsbridge, which led you from the market-place on one side to the churchyard on the other.

Sailing-ships came up this river from the sea and anchored near the bridge. I used to go down and watch the sailors unloading the ships upon the river-wall. The sailors sang strange songs as they pulled upon the ropes; and I learned these songs by heart. And I would sit on the river-wall with my feet dangling over the water and sing with the men, pretending to myself that I too was a sailor.

For I longed always to sail away with those brave ships when they turned their backs on Puddleby Church and went creeping down the river again, across the wide lonely marshes to the sea. I longed to go with them out into the world to seek my fortune in foreign lands–Africa, India, China and Peru! When they got round the bend in the river and the water was hidden from view, you could still see their huge brown sails towering over the roofs of the town, moving onward slowly–like some gentle giants that walked among the houses without noise. What strange things would they have seen, I wondered, when next they came back to anchor at Kingsbridge! And, dreaming of the lands I had never seen, I’d sit on there, watching till they were out of sight.

Three great friends I had in Puddleby in those days. One was Joe, the mussel-man, who lived in a tiny hut by the edge of the water under the bridge. This old man was simply marvelous at making things. I never saw a man so clever with his hands. He used to mend my toy ships for me which I sailed upon the river; he built windmills out of packing-cases and barrel-staves; and he could make the most wonderful kites from old umbrellas.

Joe would sometimes take me in his mussel-boat, and when the tide was running out we would paddle down the river as far as the edge of the sea to get mussels and lobsters to sell. And out there on the cold lonely marshes we would see wild geese flying, and curlews and redshanks and many other kinds of sea-birds that live among the samfire and the long grass of the great salt fen. And as we crept up the river in the evening, when the tide had turned, we would see the lights on Kingsbridge twinkle in the dusk, reminding us of tea-time and warm fires.

Another friend I had was Matthew Mugg, the cat’s-meat-man. He was a funny old person with a bad squint. He looked rather awful but he was really quite nice to talk to. He knew everybody in Puddleby; and he knew all the dogs and all the cats. In those times being a cat’s-meat-man was a regular business. And you could see one nearly any day going through the streets with a wooden tray full of pieces of meat stuck on skewers crying, “Meat! M-E-A-T!” People paid him to give this meat to their cats and dogs instead of feeding them on dog-biscuits or the scraps from the table.

I enjoyed going round with old Matthew and seeing the cats and dogs come running to the garden-gates whenever they heard his call. Sometimes he let me give the meat to the animals myself; and I thought this was great fun. He knew a lot about dogs and he would tell me the names of the different kinds as we went through the town. He had several dogs of his own; one, a whippet, was a very fast runner, and Matthew used to win prizes with her at the Saturday coursing races; another, a terrier, was a fine ratter. The cat’s-meat-man used to make a business of rat-catching for the millers and farmers as well as his other trade of selling cat’s-meat.

My third great friend was Luke the Hermit. But of him I will tell you more later on.

I did not go to school; because my father was not rich enough to send me. But I was extremely fond of animals. So I used to spend my time collecting birds’ eggs and butterflies, fishing in the river, rambling through the countryside after blackberries and mushrooms and helping the mussel-man mend his nets.

Yes, it was a very pleasant life I lived in those days long ago–though of course I did not think so then. I was nine and a half years old; and, like all boys, I wanted to grow up–not knowing how well off I was with no cares and nothing to worry me. Always I longed for the time when I should be allowed to leave my father’s house, to take passage in one of those brave ships, to sail down the river through the misty marshes to the sea–out into the world to seek my fortune.