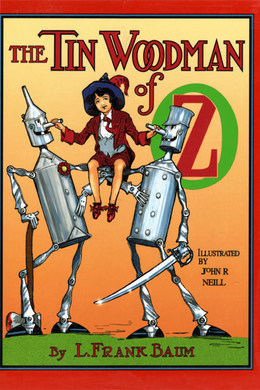 The Tin Woodman of Oz

In the twelfth Oz story, the Tin Woodman and the Scarecrow meet Woot, a Gillikin boy. The Woodman tells him how the Wicked Witch of the East (punishing him for falling in love with her ward, Nimmie Amee) enchanted his axe, which then compelled him to chop off every part of his body. The tinsmith Ku-Klip replaced them with body parts fashioned from tin. Lacking a heart, the Woodman left her. In The Wonderful Wizard of Oz, Dorothy and the Scarecrow found him in the woods; when they reached the Emerald City, the Wizard gave him a new heart. Encouraged by Woot and accompanied by him, the Scarecrow and Polychrome, the Rainbow’s daughter, the Woodman travels to the Munchkin Country to look for her. Many adventures follow, although their quest is ultimately unsuccessful, as Nimmie is now married to Ku-Klip’s assistant, Chopfyt.

The Tin Woodman sat on his glittering tin throne in the handsome tin hall of his splendid tin castle in the Winkie Country of the Land of Oz. Beside him, in a chair of woven straw, sat his best friend, the Scarecrow of Oz. At times they spoke to one another of curious things they had seen and strange adventures they had known since first they two had met and become comrades. But at times they were silent, for these things had been talked over many times between them, and they found themselves contented in merely being together, speaking now and then a brief sentence to prove they were wide awake and attentive. But then, these two quaint persons never slept. Why should they sleep, when they never tired?

And now, as the brilliant sun sank low over the Winkie Country of Oz, tinting the glistening tin towers and tin minarets of the tin castle with glorious sunset hues, there approached along a winding pathway Woot the Wanderer, who met at the castle entrance a Winkie servant.

“Who lives here?” he asked.

“The Emperor of the Winkies, who is the famous Tin Woodman of Oz,” replied the servant, who had been trained to treat all strangers with courtesy.

“A Tin Woodman? How queer!” exclaimed the little wanderer.

“Well, perhaps our Emperor is queer,” admitted the servant; “but he is a kind master and as honest and true as good tin can make him; so we, who gladly serve him, are apt to forget that he is not like other people.”

“May I see him?” asked Woot the Wanderer, after a moment’s thought.

“If it please you to wait a moment, I will go and ask him,” said the servant, and then he went into the hall where the Tin Woodman sat with his friend the Scarecrow. Both were glad to learn that a stranger had arrived at the castle, for this would give them something new to talk about, so the servant was asked to admit the boy at once.

By the time Woot the Wanderer had passed through the grand corridors–all lined with ornamental tin–and under stately tin archways and through the many tin rooms all set with beautiful tin furniture, his eyes had grown bigger than ever and his whole little body thrilled with amazement. But, astonished though he was, he was able to make a polite bow before the throne and to say in a respectful voice: “I salute your Illustrious Majesty and offer you my humble services.”

“Very good!” answered the Tin Woodman in his accustomed cheerful manner. “Tell me who you are, and whence you come.”

“I am known as Woot the Wanderer,” answered the boy, “and I have come, through many travels and by roundabout ways, from my former home in a far corner of the Gillikin Country of Oz.”

“To wander from one’s home,” remarked the Scarecrow, “is to encounter dangers and hardships, especially if one is made of meat and bone. Had you no friends in that corner of the Gillikin Country? Was it not homelike and comfortable?”

To hear a man stuffed with straw speak, and speak so well, quite startled Woot, and perhaps he stared a bit rudely at the Scarecrow. But after a moment he replied:

“I had home and friends, your Honorable Strawness, but they were so quiet and happy and comfortable that I found them dismally stupid. Nothing in that corner of Oz interested me, but I believed that in other parts of the country I would find strange people and see new sights, and so I set out upon my wandering journey. I have been a wanderer for nearly a full year, and now my wanderings have brought me to this splendid castle.”

“I suppose,” said the Tin Woodman, “that in this year you have seen so much that you have become very wise.”

“No,” replied Woot, thoughtfully, “I am not at all wise, I beg to assure your Majesty. The more I wander the less I find that I know, for in the Land of Oz much wisdom and many things may be learned.”

“To learn is simple. Don’t you ask questions?” inquired the Scarecrow.

“Yes; I ask as many questions as I dare; but some people refuse to answer questions.”

“That is not kind of them,” declared the Tin Woodman. “If one does not ask for information he seldom receives it; so I, for my part, make it a rule to answer any civil question that is asked me.”

“So do I,” added the Scarecrow, nodding.

“I am glad to hear this,” said the Wanderer, “for it makes me bold to ask for something to eat.”