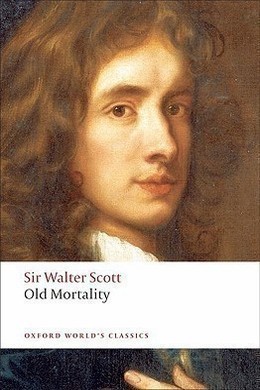 Set in 1679 during the Scottish populist rebellion known as the Covenanter uprising, The Tale of Old Mortality is one of the outstanding historical fictions of the nineteenth century. Henry Morton of Milnewood is compelled to take up arms against the royalists, who are led by Claverhouse, a true villain in Scottish history who is, nonetheless, one of Scott’s most complex characters. A moderate Covenanter, Horton – whose loyalties are divided by his love for Edith, the beautiful granddaughter of Lady Margaret Bellenden – is one of the people’s heroes who challenge King Charles II and change the course of Scottish history. Old Mortality is Scott’s undisputed masterpiece and distills the humor, grit, and romance of the west of Scotland, past and present.

“Most readers,” says the Manuscript of Mr Pattieson, “must have witnessed with delight the joyous burst which attends the dismissing of a village-school on a fine summer evening. The buoyant spirit of childhood, repressed with so much difficulty during the tedious hours of discipline, may then be seen to explode, as it were, in shout, and song, and frolic, as the little urchins join in groups on their play-ground, and arrange their matches of sport for the evening. But there is one individual who partakes of the relief afforded by the moment of dismission, whose feelings are not so obvious to the eye of the spectator, or so apt to receive his sympathy. I mean the teacher himself, who, stunned with the hum, and suffocated with the closeness of his school-room, has spent the whole day (himself against a host) in controlling petulance, exciting indifference to action, striving to enlighten stupidity, and labouring to soften obstinacy; and whose very powers of intellect have been confounded by hearing the same dull lesson repeated a hundred times by rote, and only varied by the various blunders of the reciters. Even the flowers of classic genius, with which his solitary fancy is most gratified, have been rendered degraded, in his imagination, by their connexion with tears, with errors, and with punishment; so that the Eclogues of Virgil and Odes of Horace are each inseparably allied in association with the sullen figure and monotonous recitation of some blubbering school-boy. If to these mental distresses are added a delicate frame of body, and a mind ambitious of some higher distinction than that of being the tyrant of childhood, the reader may have some slight conception of the relief which a solitary walk, in the cool of a fine summer evening, affords to the head which has ached, and the nerves which have been shattered, for so many hours, in plying the irksome task of public instruction.

“To me these evening strolls have been the happiest hours of an unhappy life; and if any gentle reader shall hereafter find pleasure in perusing these lucubrations, I am not unwilling he should know, that the plan of them has been usually traced in those moments, when relief from toil and clamour, combined with the quiet scenery around me, has disposed my mind to the task of composition.

“My chief haunt, in these hours of golden leisure, is the banks of the small stream, which, winding through a ‘lone vale of green bracken,’ passes in front of the village school-house of Gandercleugh. For the first quarter of a mile, perhaps, I may be disturbed from my meditations, in order to return the scrape, or doffed bonnet, of such stragglers among my pupils as fish for trouts or minnows in the little brook, or seek rushes and wild-flowers by its margin. But, beyond the space I have mentioned, the juvenile anglers do not, after sunset, voluntarily extend their excursions. The cause is, that farther up the narrow valley, and in a recess which seems scooped out of the side of the steep heathy bank, there is a deserted burial-ground, which the little cowards are fearful of approaching in the twilight. To me, however, the place has an inexpressible charm. It has been long the favourite termination of my walks, and, if my kind patron forgets not his promise, will (and probably at no very distant day) be my final resting-place after my mortal pilgrimage. [Note: Note, by Mr Jedediah Cleishbotham.–That I kept my plight in this melancholy matter with my deceased and lamented friend, appeareth from a handsome headstone, erected at my proper charges in this spot, bearing the name and calling of Peter Pattieson, with the date of his nativity and sepulture; together also with a testimony of his merits, attested by myself, as his superior and patron.–J. C.]