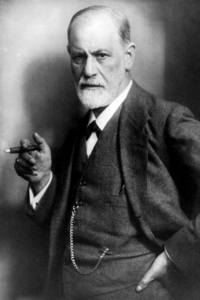 Sigmund Freud was an Austrian neurologist who became known as the founding father of psychoanalysis. In creating psychoanalysis, a clinical method for treating psychopathology through dialogue between a patient and a psychoanalyst, Freud developed therapeutic techniques such as the use of free association and discovered transference, establishing its central role in the analytic process. Freud’s redefinition of sexuality to include its infantile forms led him to formulate the Oedipus complex as the central tenet of psychoanalytical theory. His analysis of dreams as wish-fulfillments provided him with models for the clinical analysis of symptom formation and the mechanisms of repression as well as for elaboration of his theory of the unconscious as an agency disruptive of conscious states of mind. Freud postulated the existence of libido, an energy with which mental processes and structures are invested and which generates erotic attachments, and a death drive, the source of repetition, hate, aggression and neurotic guilt. In his later work Freud developed a wide-ranging interpretation and critique of religion and culture. (source: Wikipedia)

A General Introduction to Psychoanalysis (1920)

Psychoanalysis was never just a method of treatment, rather a vision of the human condition which has continued to fascinate and provoke long after the ...read more »

This classic work is essential reading for any serious student of psychology. Dr. Freud covers the hidden meanings within our dreams, especially repress...read more »

This remarkable book takes as its subject one of the most outstanding men that ever lived. The ultimate prodigy, Leonardo da Vinci was an artist of grea...read more »

Three Essays on the Theory of Sexuality (1905)

This is an excellent work for Freud enthusiasts. The work discusses the theoretical underpinnings for behavioral characteristics popularized by Freud. F...read more »

Widely acknowledged to be one of Freud’s greatest works, when first published in 1913, this book caused outrage. It remains the fullest exploration of F...read more »