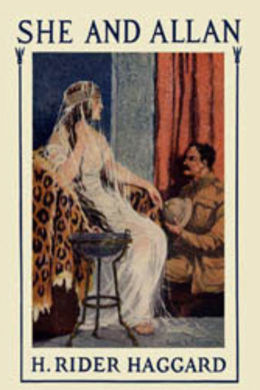 Allan Quartermain – our hero – and Ayesha (that is, She Who Must Be Obeyed) share the limelight in this great adventure, but oddly enough considering the stars on stage, it’s Umslopogaas the Zulu who steals the show. A supernatural fantasy thriller featuring a magic token, telepathy, powers of the occult, and a people lost to time in the depths of ancient Africa.

I believe it was the old Egyptians, a very wise people, probably indeed much wiser than we know, for in the leisure of their ample centuries they had time to think out things, who declared that each individual personality is made up of six or seven different elements, although the Bible only allows us three, namely, body, soul, and spirit. The body that the man or woman wore, if I understand their theory aright which perhaps I, an ignorant person, do not, was but a kind of sack or fleshly covering containing these different principles. Or mayhap it did not contain them all, but was simply a house as it were, in which they lived from time to time and seldom all together, although one or more of them was present continually, as though to keep the place warmed and aired.

This is but a casual illustrative suggestion, for what right have I, Allan Quatermain, out of my little reading and probably erroneous deductions, to form any judgment as to the theories of the old Egyptians? Still these, as I understand them, suffice to furnish me with the text that man is not one, but many, in which connection it may be remembered that often in Scripture he is spoken of as being the home of many demons, seven, I think. Also, to come to another far-off example, the Zulus talk of their witch-doctors as being inhabited by “a multitude of spirits.”

Anyhow of one thing I am quite sure, we are not always the same. Different personalities actuate us at different times. In one hour passion of this sort or the other is our lord; in another we are reason itself. In one hour we follow the basest appetites; in another we hate them and the spirit arising through our mortal murk shines within or above us like a star. In one hour our desire is to kill and spare not; in another we are filled with the holiest compassion even towards an insect or a snake, and are ready to forgive like a god. Everything rules us in turn, to such an extent indeed, that sometimes one begins to wonder whether we really rule anything.

Now the reason of all this homily is that I, Allan, the most practical and unimaginative of persons, just a homely, half-educated hunter and trader who chances to have seen a good deal of the particular little world in which his lot was cast, at one period of my life became the victim of spiritual longings.

I am a man who has suffered great bereavements in my time such as have seared my soul, since, perhaps because of my rather primitive and simple nature, my affections are very strong. By day or night I can never forget those whom I have loved and whom I believe to have loved me.

For you know, in our vanity some of us are apt to hold that certain people with whom we have been intimate upon the earth, really did care for us and, in our still greater vanity–or should it be called madness?–to imagine that they still care for us after they have left the earth and entered on some new state of society and surroundings which, if they exist, inferentially are much more congenial than any they can have experienced here. At times, however, cold doubts strike us as to this matter, of which we long to know the truth. Also behind looms a still blacker doubt, namely whether they live at all.

For some years of my lonely existence these problems haunted me day by day, till at length I desired above everything on earth to lay them at rest in one way or another. Once, at Durban, I met a man who was a spiritualist to whom I confided a little of my perplexities. He laughed at me and said that they could be settled with the greatest ease. All I had to do was to visit a certain local medium who for a fee of one guinea would tell me everything I wanted to know. Although I rather grudged the guinea, being more than usually hard up at the time, I called upon this person, but over the results of that visit, or rather the lack of them, I draw a veil.

My queer and perhaps unwholesome longing, however, remained with me and would not be abated. I consulted a clergyman of my acquaintance, a good and spiritually-minded man, but he could only shrug his shoulders and refer me to the Bible, saying, quite rightly I doubt not, that with what it reveals I ought to be contented. Then I read certain mystical books which were recommended to me. These were full of fine words, undiscoverable in a pocket dictionary, but really took me no forwarder, since in them I found nothing that I could not have invented myself, although while I was actually studying them, they seemed to convince me. I even tackled Swedenborg, or rather samples of him, for he is very copious, but without satisfactory results. [Ha!–JB]

Then I gave up the business.