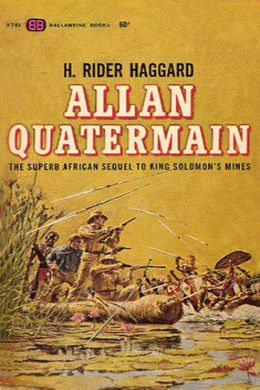 Before there was Indiana Jones there was Allan Quartermain: the original explorer, treasure hunter, and adventurer. In this sequel to King Solomon’s Mines, Allan Quatermain and his companions once more set out for Africa, this time in search of a white race reputed to live north of Mount Kenya. They survive fierce encounters with Masai warriors, undergo a terrifying subterranean journey, and discover a lost civilization before being caught up in a passionate love-triangle that engulfs the country in a ferocious civil war. Haggard not only narrates his story with wonderfully dramatic and poetic touches, but also reveals many Victorian preoccupations with evolution and race, sexuality, and the New Woman.

A week had passed since the funeral of my poor boy Harry, and one evening I was in my room walking up and down and thinking, when there was a ring at the outer door. Going down the steps I opened it myself, and in came my old friends Sir Henry Curtis and Captain John Good, RN. They entered the vestibule and sat themselves down before the wide hearth, where, I remember, a particularly good fire of logs was burning.

‘It is very kind of you to come round,’ I said by way of making a remark; ‘it must have been heavy walking in the snow.’

They said nothing, but Sir Henry slowly filled his pipe and lit it with a burning ember. As he leant forward to do so the fire got hold of a gassy bit of pine and flared up brightly, throwing the whole scene into strong relief, and I thought, What a splendid-looking man he is! Calm, powerful face, clear-cut features, large grey eyes, yellow beard and hair–altogether a magnificent specimen of the higher type of humanity. Nor did his form belie his face. I have never seen wider shoulders or a deeper chest. Indeed, Sir Henry’s girth is so great that, though he is six feet two high, he does not strike one as a tall man. As I looked at him I could not help thinking what a curious contrast my little dried-up self presented to his grand face and form. Imagine to yourself a small, withered, yellow-faced man of sixty-three, with thin hands, large brown eyes, a head of grizzled hair cut short and standing up like a half-worn scrubbing-brush–total weight in my clothes, nine stone six–and you will get a very fair idea of Allan Quatermain, commonly called Hunter Quatermain, or by the natives ‘Macumazahn’–Anglicè, he who keeps a bright look-out at night, or, in vulgar English, a sharp fellow who is not to be taken in.

Then there was Good, who is not like either of us, being short, dark, stout–very stout–with twinkling black eyes, in one of which an eyeglass is everlastingly fixed. I say stout, but it is a mild term; I regret to state that of late years Good has been running to fat in a most disgraceful way. Sir Henry tells him that it comes from idleness and over-feeding, and Good does not like it at all, though he cannot deny it.

We sat for a while, and then I got a match and lit the lamp that stood ready on the table, for the half-light began to grow dreary, as it is apt to do when one has a short week ago buried the hope of one’s life. Next, I opened a cupboard in the wainscoting and got a bottle of whisky and some tumblers and water. I always like to do these things for myself: it is irritating to me to have somebody continually at my elbow, as though I were an eighteen-month-old baby. All this while Curtis and Good had been silent, feeling, I suppose, that they had nothing to say that could do me any good, and content to give me the comfort of their presence and unspoken sympathy; for it was only their second visit since the funeral. And it is, by the way, from the presence of others that we really derive support in our dark hours of grief, and not from their talk, which often only serves to irritate us. Before a bad storm the game always herd together, but they cease their calling.

They sat and smoked and drank whisky and water, and I stood by the fire also smoking and looking at them.

At last I spoke. ‘Old friends,’ I said, ‘how long is it since we got back from Kukuanaland?’

‘I ask because I think that I have had a long enough spell of civilization. I am going back to the veldt.’

Sir Henry laid his head back in his arm-chair and laughed one of his deep laughs. ‘How very odd,’ he said, ‘eh, Good?’

Good beamed at me mysteriously through his eyeglass and murmured, ‘Yes, odd–very odd.’

‘I don’t quite understand,’ said I, looking from one to the other, for I dislike mysteries.

‘Don’t you, old fellow?’ said Sir Henry; ‘then I will explain. As Good and I were walking up here we had a talk.’

‘If Good was there you probably did,’ I put in sarcastically, for Good is a great hand at talking. ‘And what may it have been about?’

‘What do you think?’ asked Sir Henry.

I shook my head. It was not likely that I should know what Good might be talking about. He talks about so many things.

‘Well, it was about a little plan that I have formed–namely, that if you were willing we should pack up our traps and go off to Africa on another expedition.’

I fairly jumped at his words. ‘You don’t say so!’ I said.

‘Rather,’ said that gentleman.

‘Listen, old fellow,’ went on Sir Henry, with considerable animation of manner. ‘I’m tired of it too, dead-tired of doing nothing more except play the squire in a country that is sick of squires. For a year or more I have been getting as restless as an old elephant who scents danger. I am always dreaming of Kukuanaland and Gagool and King Solomon’s Mines.